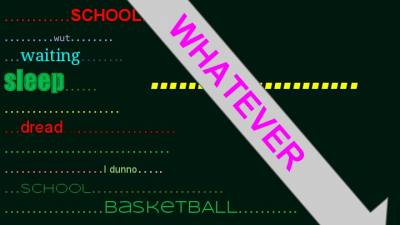 My original concept for my slide was to base it around contrast and making things stand out. I started off with a green-almost-black background and put atop of it neon colored words that stand out not only because of the background's dark color, but because the words contrast each other. Dots around the words simulate isolated thoughts, but are also an excuse to make the words stand out even more due to them being either darker toned versions of the words' colors or a contrasting color. The arrow piercing through the slide can catch the viewers eye for three reasons: one being the fact that it's bleeding off of the slide, two being the pink neon "WHATEVER" plastered across it, and three being that it is considerate of the rule of thirds, being placed in a position that would be more likely to be immediately noticed by the viewer, forming an eye-catching setup to the slide.