A compromise  between The Taming of The Shrew and Coming to America,

Similarities in finding love, obtaining wealth, and family can be found in the 1988 movie Coming to America and the 1590’s  book the Taming of the Shrew. It was normal in the Elizabethan era for women to “aspire” to get married. The woman had very little, to no say about who her husband would be. Marriages are normally arranged by the parent to bring “prestige” or wealth to the family. Marriage became a family decision as opposed to an individual decision due to the fact that marriage was no longer a choice. In the Taming of The Shrew, Katherine  set the tone for her and Petruchio. This shows that at this time period woman did not have say and married by force the family.Today, however, the situation is more complex, In modern time the man and woman have the ability to choose who they want to marry , and also have the option to not marry a lot without being shamed for it.

“ Call you me daughter? Now, I promise you

You have showed a tender fatherly regard

To wish me wed to one half lunatic,

A mad-cup ruffian and a swearing Jack,

That thinks with oaths to face the matter out.” 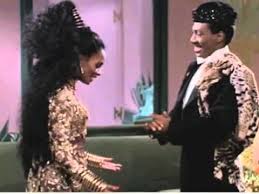 and in 40 days, you will marry Imani.

May I have your attention, please?

The wedding will proceed in 40 days.

Prince Akeem has met his “Queen to be” Imani. When in conversation Imani was trained to do his every command. He uses the excuse of  “ he’s never been any where else but Africa.” As a result upon his father’s consent he allowed him and Seemi to go to America. Little does his father know that the object of this plan is to find him a wife of his own choosing.

And dart not scornful glances from those eyes

To wound thy lord, thy king, thy governor……

Then vail your stomachs, for it is no boot,

And place your hands below your husband’s foot:

In token of which duty, if he please,

For this quote you can see that Katherine is not happy in her marriage. She has come to the point where she has expected the fact that her father just gave her away. To marry Petruchio without knowing his true intentions. As a result of Katherine is under the impression that the only way to be happy with her husband is to train him to her pleasing. 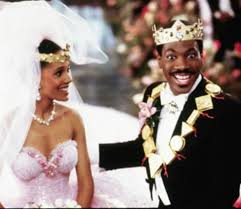 Prince Akeem as found a wife that suits him for him. His father was understanding and approved of the marriage. Although he was not truthful of his reasoning for going to America, his outcome was positive.

In the book The Taming of the Shrew, Baptista willing gave Katherine away to marry Petruchio. Being unmindful of Katherine’s feeling about the marriage, as a result katherine is unhappy in her marriage. What these portrayals show us about society's attitudes towards courtship/dating is that regardless of the time period there will forever and always will be a parental consent. However courtship and dating are to different things. However the resulting action is to be married .