My main reason for researching about the financial aid system is to find out more about it and find a way to help the system improve. Many people do not not know but there are 2.6 billion people in the world who live on less than two dollars a day and nearly eighty percent of those people do not have access to a bank account. The people who are affected by this use jewelry and sometimes use livestock instead of using cash.

Many people believe that foreign aid will end global poverty. This may be true. Many people die from not having enough money for medicine, food and other supplies that people need to survive. Foreign aid could help and it could not help. We need to find a way to help people who do not have money to afford food, medicine and other supplies. There has to be a way. 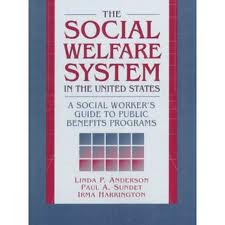 A book about the United States social welfare system.

There are many factors that decide whether you are eligible for the State welfare system. One of the factors is the person’s gross and net income. Another factor being the size of the family and any serious problems such as medical emergencies, pregnancy, homelessness or unemployment. For each person who is applying for financial aid a case worker is assigned to find out if the person is eligible for the welfare program. They will also find out which benefits you will given.

The department of public welfare in Pennsylvania.
<http://pa.welfareinfo.org>

The caseworker will find out which benefits you will given. There are many types of welfare available for the people. Since the US government gave back the control of the welfare system back to the states each state has their own requirements. Most states offer the basic aid such as health care, food stamps, child care assistance, unemployment, cash aid, and housing assistance.

The way to apply for a welfare program one must contact the local Human Services Department. An appointment is made with a caseworker. The caseworker will give a list of required documents needed at the appointment. Documents that are usually asked for are proof of income, ID, and utility bills or other proof of residency. Once an appointment is completed a case worker will review all required documents, applications, and information provided at the meeting. They will use this information to determine eligibility and how much aid you should receive.

Wow. Just reading the introduction I was hooked. This is amazingly thought out and well put together. Great Job.