Comparing The Taming of the Shrew” to “ The Back up Plan”

In “The Taming of the Shrew,” it is proven  that romantic love within relationships is mainly controlled by men and the desire to possess the other person.  In “Shrew,” Petruchio swears that he can have his way with Katherine no matter what she wants. In contrast, Zoe from “The Back-up Plan” takes on the “manly” role and becomes the possessive and dominant one within the relationship.

Zoe in the movie; reflects Petruchio from “Shrew” because she is the dominant character just like Petruchio in the play. They share some of the same key roles, emotions, tactics, and determination to gain what they want within their relationship. Throughout the movie, Zoe gains the support of her friends because they know how badly she wants to have a baby, likewise, Petruchio also gains the support of his friends. Also, the romantic relationships within “Shrew” and “The Back-Up Plan” were both forced. Zoe did not like Steve in the beginning of their relationship; instead,she wanted him for one reason to be able to have his baby. Although there are many similarities, Zoe, unlike Katherine, actually has feelings for Steve once she grows closer to him. Likewise, Petruchio was pursuing Katherine, whereas Zoe was pursuing Steve, until a change of events when Steve messes up and he ends up chasing after her. The differences allow for a peaked interest in both scenarios;Allowing the viewer to see that women have accessible power and control either equal or more than men these days. But at the end of the day, both parties in the situations must maintain the same love for each other in order for the relationship to be deemed a romance.

“I am ashamed that women are so simple to offer war where they should kneel for peace, or seek for rule, supremacy, and sway when they are bound to serve, love and obey.”

In this part of Katherine’s speech, given after a bet that was placed, she is explaining women’s loyalty to their men. The bet placed was to see who’s woman would come to them first when summoned. Being as though Katherine was not only the first, but only woman to come when called, Petruchio won the bet. Katherine was surprised at the fact the other women did not adhere to the needs of their partner. In her speech Katherine emphasizes the notion that women should surrender to their man and everything that they do should be in benefit of him; what he wants, he gets. In the time period of this play, it was imperative that women remain inferior and passive within relationships or else, the would not make good wives. From little, girls were raised knowing that they not only should get married, but were obligated to, and there would be no marriage without a form of loyalty.

Zoe finds herself in a similar situation as she tries to explain to Steve what her plan is for their future, but at the same time how she does not plan to fall in love with him but yet, they go their separate ways. 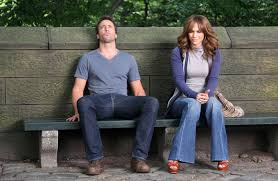 In this scene from "The Back-Up Plan," Zoe nervously explains to Steve that her future plans are to fall in love, get married, and have a baby, but not necessarily in that order. More like, have a baby, get married, and fall in love. Throughout the movie, Zoe is always anxious and nervous about every little thing she does. She is afraid, that something, or someone, may mess up her plan to have a baby, unlike Petruchio, who in the movie knows exactly how his plan is going to work and doesn’t fear that anything will mess that up for him.

"It's awful, awful, awful. Then a small moment happens, that's so magical. That makes it all worthwhile."- Steve

Steve tries to kindly get Zoe to understand that certain things in life can not be forced. It is all catalyzed by a small event. Knowing that Zoe is worried that, because she is getting older, she will no longer be able to carry a baby for much longer, he tries to console her by letting her know that things will happen at the least expected times. Although, Petruchio and Katherine seem to not agree. Given that Petruchio is forcing what he wants within a relationship, and Katherine has to abide; same way that Zoe is forcing what she wants and Steve has to abide.

“Thy husband is thy lord, thy life, thy keeper, thy head, thy sovereign, one that cares for thee, and for thy maintenance commits his body to painful labor both by sea and land…”

Towards the end of the play, Katherine gives a speech devoting herself to Petruchio. She knows and accepts the fact the her husband, being a man that he his, has the right to control her and have complete dominance over her. This is an attribute that she becomes accustomed to, so much that she believes that her love and obedience to Petruchio is not even enough to thank him for the role he plays in her life; dominant and superior. She ends by saying “Too little payments for such a debt.”

In conclusion, both the movie and play prove that love and relationship are controlled by the desire to possess the other, but it does contrast the idea that dominance is not only a role that men play. In the end of the movie, Zoe ends up with twin babies, falling in love with a man that she never thought twice about, and having a grand wedding. Petruchio, at the end of the play, wins over Katherine and her loyalty to him. Both the movie and play end just the way the protagonists anticipated; with love, loyalty, and feeling of accomplishment.

I like how you noticed that the gender roles of "Taming of the Shrew" were reversed in "The Back Up Plan."

This project taught me that sometimes, romantic/marital relationships are forced, often when one of the two parties is exploiting the other one to fulfill his/her own selfish desires.