Hello, My name is Isabella Blackwell, I am a freshman at Science Leadership Academy. This year in Mrs. Dunn’s English Class, all students had to choose a specific topic that we felt strongly about to become agents of change. The topic I chose was to learn about what causes children to go into hospitals and why they are so appreciative unlike kids my age who aren’t in hospitals. I wanted to basically go and see why they act this way, and compare it to real life. Also, to give talk to kids in hospitals and give them “support’.

Many people don’t know or care to understand that life is harder for many people other than themselves. Usually people cry over not getting to go to a party or getting your phone taken awa,y from them. I realized that even I do this too. Kids in hospitals are on deathbeds and their parents not knowing if their kids are going to be alive.

At CHOP, there are many kids that are survivors of many things. One kid named Will had a lot of things wrong with him. He had UPJ and kidney stones. The hard part about it was that there wasn’t even any symptoms or signs that he had these disorders. He was only 3 years old when doctors told him that something was wrong. But in the end, he was very greatfull that he was able to come over it and still become a great kid. Meanwhile, kids like me dont understand what it is to have something this serious happen in your life.

Another child that has had a really rough time “growing up” was Hadi. Hadi had to have reconstructive surgery. He had problems in a private area and wa very young when it started. There were so many questions on why this was happening to him. Thats why I was so concerned about people not seeing past their stupid problems about getting in trouble or just drama.


I want to put my focus on talking to kids in hospitals and seeing how they adapt to life basically “living” in the hospital. I want to go to CHOP and do what I said above. But overall, I am really interested in seeing what it is that keeps these kids so motivated and thankful. 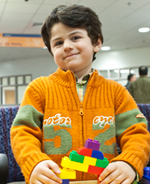