Oh, you’re reading this already? I’m sorry, I was hardly prepared. Hello, My name is Damir Hunley and I am a 9th grade student here at Science Leadership Academy. Progressively, we have grown as students in Ms. Dunn’s classroom, as far as grammar, writing structure, and “point-making” is concerned. We were given a project, though it was up to us to write the rubric. Not literally, but as far as information is concerned, we made the project. The project was based on our ideas, beliefs, and feelings about what’s going on in our world; what are the problems. Given the task I immediately knew what I was going to do because it was something I felt strongly about. In Philadelphia, standardized test percentages in the science sections are extremely low among minorities; my target especially, African Americans. For years, African Americans have been under the 20th percentile of proficiency in the biology section of the Keystone exams. What will we do to change this? What are the catalysts to these problems?

The main point, and my issue being the fact that African Americans are belittled as far as scientific education is concerned and it is our fault, as well as the world’s. Specifically, I’m interested in the subject for a few reasons, one being the pursuit of my dream in the science field, the achievement of becoming a profound and renown Marine Biologist. Even though that sounds beyond the point there is reasoning behind it. The pursuit of this career is not for myself but for my race, and people as a whole. As shown in the chart found on The American Physical Society Site below, There is only a small, 14% of African Americans in the United States that are at college level age.In the last 15 years the amount of graduates has decreased by 1-2 percentiles in almost every field. The chart depicts the percentages of those few that graduated with bachelor degrees in science majors from 1995-2010. 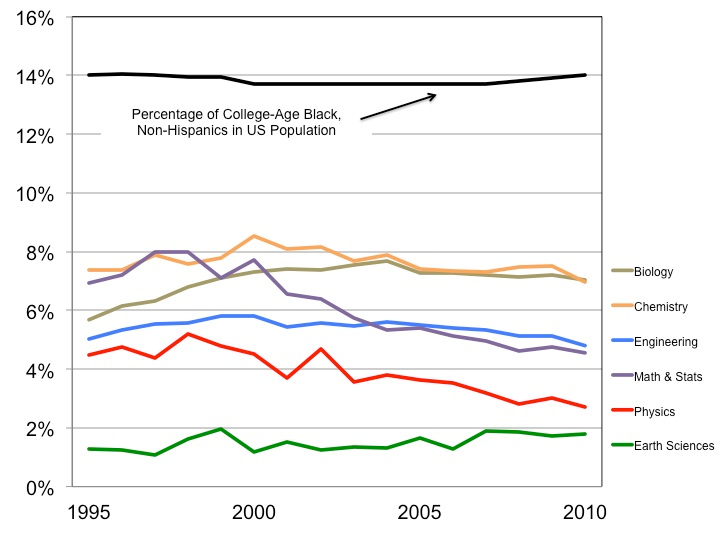 (Chart found on The website for The American Physical Society

This issue is extremely significant and beneficial to the future of Philadelphia. If change comes from it, then the educational value of the city will improve drastically. If there is some sort of way to solve the problems at hand then everything I’m ranting about will be of good meaning. Hopefully with further pursuit, I should be able to make a change, this is how I plan to discover who I am, and what effect I have on the world. To start my research I wanted to find a way to get involved in the educational system of Philadelphia. To do that, I went to the root, The School District of Philadelphia. I found great results when coming across an article on the website which really supported my already ‘assumed’ hypothesis on how the educational system in the science fields was at a halt. The article briefly describes how only 20% of the 11th grade students in Philadelphia (who knows what portion of that percentage was African American) scored proficient or advanced on the biology section of the Keystone exams.

Right after, they give a direct link to a document which portrays in more detail, the information presented to the reader. They have several charts which give a great visual representation of statistics for less confusion. After I read and analyzed the disappointing statistics I pondered on what I’d physically do about it. My first thought was to volunteer somewhere that aided in inner city education, though no schools were accepting. Secondly I decided to try and assist at the Academy of Natural Sciences  as a Live Animal Care Center volunteer or an exhibit guide, anything to help educate,though neither of the positions were available.

Questions had arisen the moment I started this project but how would I get the answers? I wasn’t specifically sure though I was fueled by ambition  to find out. What is the source of this “miseducation”? I was bound to that question first as it is the most important. You find the source and you find the problem, you find the problem and you solve the problem. I like to call this question the “Eye of the Storm”. Who was responsible for the slacking? Are the children at fault, or is it society’s mishaps that curse our children intellectually? Although the questions linger still, some of them may have been partially answered in this editorial. The hard-hitting point of the editorial is deep and beyond explanation at this time though there was one thing that stuck with me. Credit due to the author(s) :

“Entrenched stereotypes about who does well in science and math also work against minorities in classrooms. Too many teachers give up easily on them simply because they are not expected to do as well as white students. Despite those challenges, many minorities still enroll in science and math programs in college but fewer of them earn a degree in those programs in five years”.

Could this be the direct source of the problem at hand? The issue is currently under further investigation and coverage by myself. I hope to continue pursuing this topic to find better results and to hopefully in time, help fix the problem.

Damir I think that we have similar topics. Education really is key especially in the sciences. Our world is turning into a place where science will rule and I don't think that African Americans should be falling behind. I never really thought about your topic very much until now. You have inspired me toget down to the nitty gritty of the African American community and miseducation. Good job!