Food labeling is my game and Zoe is my name. If you’ve been following my previous two blog posts (which will be listed below just in case you haven’t) you will know that for my You and the World project done in my 9th grade english class I have been researching all about food labeling. I think that it is now a hot topic of this year especially in the United States. More and more people are becoming aware of this prominent issue and protesting against it. I believe that within the next couple of years some major changes will be made!

For my You and the World agent of change I decided to help those who wanted to shop for organic and GMO free food. For my agent of change I made a pamphlet on exactly how to shop for these items and also gave a little information to educate more people on the subject of food labeling and what is actually in your food (disclaimer: it is gross). I made these pamphlets and then decided I needed to hang them up someplace I knew that people would have easy access to. I live in Mt. Airy and also just so happen to be right around the corner from the Weaver’s Way Co-op. This little mini-grocery store has strictly organic and locally grown food products which made it a perfect match for where to put up my pamphlets. Right outside the Co-op, protected from the rain, is a huge bulletin board where anyone can hang up anything from house listings to babysitting advertisements. I pinned up quite a few of my pamphlets and plan to replenish them as needed!

The process of my You and the World had it’s ups and downs but eventually everything worked out nicely. When it came to choosing a topic for my You and the World project I had originally gone with gay rights. However I realized that there were also three other people with that same topic, too, so I felt that it would get all the attention it needed without my help! While in 8th grade I had read the book The Omnivore’s Dilemma and watched Food Inc. I became acutely aware of how terrible this affair is. As I was pondering over what my topic of choice should be, I remembered what I had learned the previous year. At the time I knew that the issue of labeling food had not been recognized as big deal because it was (and still is) perfectly legal for companies not to include the antibiotics or GMOs the put in the product on the label. I knew I had found my topic! For blog post 1 I did a lot of research on what was currently happening with the government’s involvement and what was happening on a national level. For blog post 2 I did my individual research which consisted of my going out and buying organic and ‘natural’ peas and comparing them. I also talked about success stories of a store and restaurant that had gone all organic and local. When it came to deciding what my agent of change should be I knew that I wanted to make others aware of my subject while also helping them find food that had no GMOs and was all organic. I also knew that I wanted to make my finished agent of change available to everyone. Originally I had thrown around the idea of putting an ad in the Weaver’s Way newspaper but that costed money, so I decided to make a pamphlet that was easy to understand and convenient to just stick in your purse or shopping bag.

This project has definitely left an impact on not only me, but I believe my

community, too. I had a little previous background knowledge on the topic of food

happening in relation to our country. I used to occasionally eat at a fast food

food repulses me. Fun fact: Chicken McNuggets from McDonald’s are sprayed with

0.2% of Tertiary butyl hydroquinone (TBHQ), which is a chemical that if consume 5

grams is proven to be fatal. I feel that my project has had an impact on two

communities. One, my internet community as I have shared the link to my blogs with

my fellow peers, and multiple people have told me how much they learned. My second

community (my physical one), Mt. Airy, has been impacted by my pamphlets that I will

eat and where/how to get the “good” food. I feel that I can take a leading role in my

providing the community with my own creations like my pamphlets. I also think that I’d

like to collaborate with those around me, especially the youth in my neighborhood,

because I feel that we as a group have a powerful voice. I will take away from this

big or small in this world and that all or important. I know that creating my pamphlets

educating people on it and helping them eat right.

Below is a documentation of my process of making and putting up pamphlets!

Photo captions:
1. The pamphlet so everyone can have access to it!
2. Myself standing next to the pinned pamphlet.
3. The Weaver's Way Co-op sign.
4. My pamphlet on the bulletin board.
5. The first printed copy of my pamphlet. 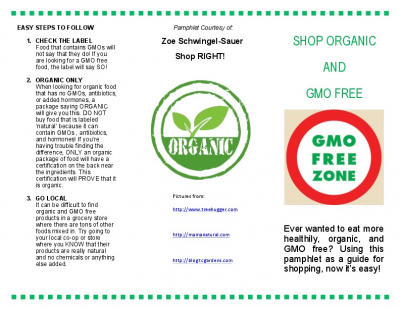