Posted by Javier Peraza in English 1 - Dunn on Wednesday, November 28, 2012 at 7:00 am
My name is Javier Peraza and I am a freshman student attending SLA. For an English project we have to pick a world issue and blog about it. We also have to go out in the world publicly and try to help fix the issue we picked. I decided to choose lack of human kindness for my issue. Before I went to SLA I attended a catholic school where being a good samaritan was pressed hardly on its students. Because of that I am interested in going out in the world and physically making a difference. I feel lack of human kindness is a broad topic so I am going to central my project around the organization of Pay-It-Forward.
For those of you that do not know what the Pay-It-Forward movement is, its doing good deeds not because someone has done one for you but because you want to out of the kindness of your heart. The point of Pay-It-Forward is to start a chain reaction of good deeds by inspiring people to find kindness in their hearts and be generous.  Pay-It-Forward has tons of members worldwide that go around performing acts of good to make the world a better place. A Pay It Forward act of kindness could be helping pay the bill for a customer at a store or even just helping an elderly woman cross the street. It can also be returning lost items to their rightful owner and donating money to people in need. Any act deemed kind is a Pay It Forward deed. Click here for the Pay-It-Forward official website http://www.pifexperience.org
There has been accounts of many generous Pay-It-Forward stories but one I find extremely influential is that of a good samaritan asking of nothing but to see people happy. In Sherwood, Oregon a Target cashier bears witness to one of the most inspirational things that could go on in a local store. At register 11, Debora Durral had just saw that family’s credit card was denied. They didn’t have enough money for the bill so a kind good samaritan quietly paid the bill. When the family found out what had happened they were so taken back from joy that there is people in this world that are compassionate that they gave what little money they did have to pay for the people’s bill behind them. Inspired by the family, the next customer did the same for the people behind them. Debora Durral witness as each person in line contributed money to other people in line. Finally when the last person in line had no one else to contribute to, that person gave money to Debora who then went on to do the same in other local stores. I cried all the way home and just thanked the Lord," she said. This is one of a kind story that shows what Pay-It-Forward is really about. To read more about Debora Durral click here http://www.katu.com/news/local/Kindness-really-is-contagious-Customers-at-Target-pay-it-forward-175036691.html 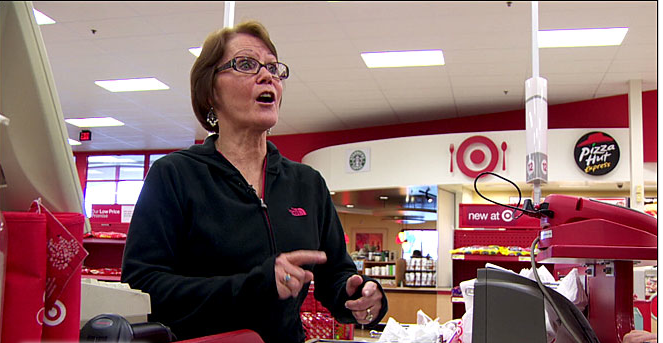 Debora Durral accounting her story of what happened that day.

Another story that I found influential enough to share with you is the birth of the Karma Seed. On April 25, 2010 a man named Christopher Lo lost his camera outside of his university’s library. Although he doubted he would find it there, he check the university’s lost and found website and to his surprise found his camera. When he retrieved it he found a video on there that he definitely had not taken. The video was of the person who had found his camera returning it. Click here to see the video http://thekarmaseed.org/about# . Inspired by the kindness that some people have in the world helped Christopher create the Karma Seed. The Karma Seed, which you go on The Karma Seed.com to get, is a small gift card in the shape of a seed which you put money on. You carry the Karma Seed around in your purse or wallet and when the opportunity comes to be generous you use it to pay for someone’s bill. After you pay for their bill you give them the Karma Seed to go out in the world and do the same. Each person with the Karma Seed can add more money to it online and if you visit the website you can track your seed as it goes around the world doing good deeds. You can also upload stories of what you used the Karma Seed for and read other stories of what different people used it for. Pretty soon your very own Karma Seed has gone on a huge adventure spreading joy and generosity.

As I continue researching about the Pay-It-Forward movement throughout the year I ask myself how I can make a difference in the world. Although knowing what a good deed is could be said as easy, thinking of something original and yet strong enough to make an impact on the nation might not be so easy. While the project progresses I will try to at least once a week go out publicly and perform an act of kindness. My hopes and goals are to inspire people to do the same, maybe creating a chain reaction like the one that Debora Durral witnessed. I ponder the question “Can one person really make a difference.” After investigating the news I see that most of the Pay-It-Forward stories only occur because of one person’s doing. So the answer to my question is, yes. If you are someone who has always wanted to make a difference but never got out there because you thought that you alone couldn’t do it, then please take this blog literally. The power of someone’s will is extremely strong and can be proven in history for the many accounts of change that one person has made. So, get out there and make a difference because you can do it. Join many others in the Pay-It-Forward movement and make a change now!