My name is Jaiye Omowamide and I am a ninth grader who attends Science Leadership Academy. For my English class, my teacher Ms.Dunn asked us to think of and choose a problem in the world that we feel strongly about. Automatically, I thought of animal cruelty and abuse in America. As a child, I've always had a deep affection for animals. I feel as if it is my duty to share with the world, the horrors, as well of my thoughts and feelings on this problems.

As of December 2013, Pet-abuse.com has reported 19,334 cases of animals that were treated in a inhumane way in which 17,100 of those cases were reported in the United States, and that’s not all of them. While hundreds of cases are reported, thousands go unreported and are ignored.

Neglect and abandonment seems to be the highest form of abuse used against animals. Pet expert, Laura Maloney wrote an article for USA Today on her thoughts on animal abuse. Below she wrote:

Animal cruelty could be divided into two categories: intentional cruelty and     unintentional cruelty or neglect. Intentional cruelty means an individual has purposely inflicted physical harm or injury on an animal. But neglect is much broader: It could mean an animal has been denied the basic necessities of care, such as food, water, shelter or veterinary care; it could also mean that the pet parent is unaware he or she is doing anything wrong and simply needs to be educated on how to properly take care of the animal. And at its most basic level, it simply could be the state of being homeless — which is the highest risk factor for any animal in this country.

Did you read that correctly? Of course intentional cruelty is unable to be solved on my behalf because of the barbaric mind of the beholder, but unintentional cruelty can be! As stated above, neglect is caused because the pet owner has no idea that what he/she is doing is wrong! This is where I come in. I want to use my knowledge to guide those into treating animals with respect and dignity. 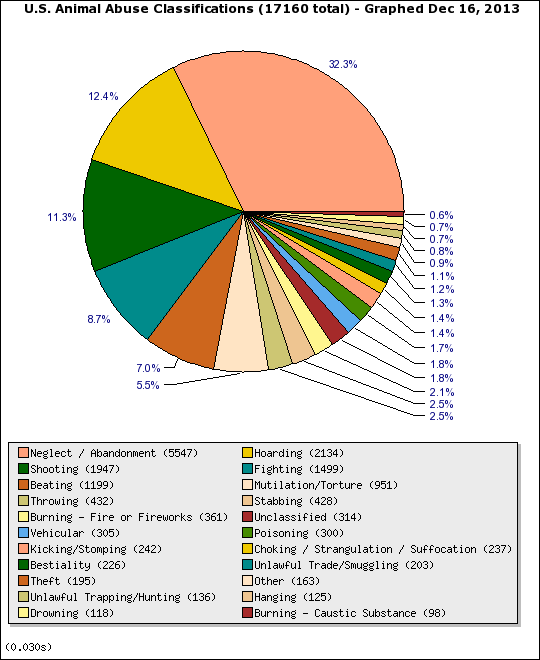 This pie chart shows the different types of abuse inflicted on animal throughout the U.S

Following neglect and abandonment is hoarding at 12.3 percent, shooting at 11.7 percent, fighting at 8.7 percent and beating at 7 percent.

Now it’s my turn to challenge this problem. Throughout the next two blogs, I am going document my status as well as provide new information for readers to let them know how I tackle this situation. My goal is to fully educate others on this problem so they can also help the world with one of the many, horrible things it has to offer. I want to make a change and change starts with you! Look out for my next blog!

I like your article. You really get across in detail how severe animal cruelty is today. Your content was good, but I think that the layout could have been a little neater. Other than that it was interesting and informative.

Good job, I really liked your blog! I did the same topic so I obviously agree with your point of view on animal cruelty. I liked all the information you included. Anyone that reads your blog can learn a lot about abuse on animals. One thing you could include is more pictures of animals in the blog, but overall its great!