You and the world

Hello, My name is Josiah Mast and I have been doing a you and the world project in my english class on the topic of Marijuana. In my last post (https://scienceleadership.org/people/jmast) I talked about how if marijuana is legalized our city could make a lot of money to fix up rough communities and other places that need to be worked on. I was very excited to get started on this project and went with my head down just thinking about how I could make marijuana legalized. I thought first I could start with a survey(https://docs.google.com/a/scienceleadership.org/forms/d/1QiJSDplCavXZuHSKYoYpedm0p03r1TYhDciHMGe-nmg/edit) and than show the results to the principle and prove that he was not letting people express themselves through things that are not considered to be “promoting something that is not okay in today’s society”. People said things like “Josiah you can’t just walk into the principal's office and change his mind. That’s just not how it works”. In my mind I was saying that they were right and that I should slow the pace down but in my heart though I was just saying things don’t just become legal you have to fight for it. So I than went back to the survey idea and started having people fill it out. I received 81 responses on my survey(all anonymous) and I really felt that I was giving the people of SLA a chance to share their feelings on a topic that has kind of been shunned by the elders of the school.

I was very happy with the results I got but I knew that this little survey was not going to change the mind of our principle. I came in luck when Madison siegel approached me to tell me about her aunt who is fighting in the state of Pennsylvania to make marijuana legal. This was just the thing I needed. It was someone I could write letter to or talk to who had an actual say in talking to the state of Pennsylvania on making marijuana legal for medical and recreational uses. This was also happening when I was getting flooded with survey responses. I was saying to myself that I could possibly pull this off. I could possibly walk into SLA with marijuana socks and not be told to take them off. I could do this. I started to exchange letters with Madison’s aunt so that we could talk about what I could do in SLA to try and change what was happening. I than decided to go for help from the people that did my survey. I had done a few written response questions and wanted to see if there was anything helpful in their writings that I could try. 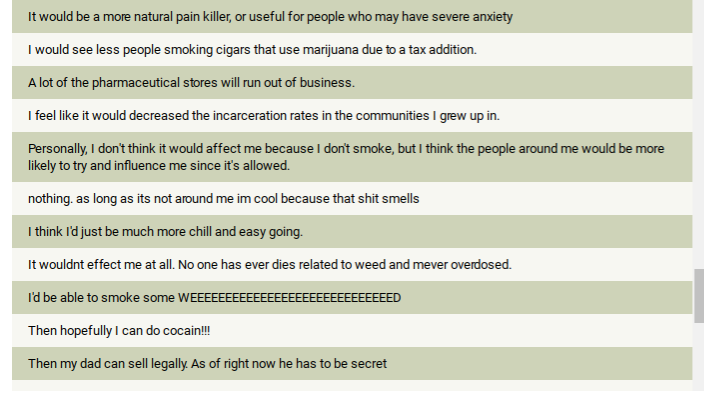 Some of the results from my survey

That is all of the project that I have done right now but I believe for my slate post 3 I will have everything finished and ready to go so that I can or have made a difference in the community around me. If you would like to do some research on your own here is a link to my bibliography.https://docs.google.com/document/d/1LrJEKPdStKFPDAbwneFWhu-ehf2GsNKtHF3ymUBM-Os/edit