For my capstone I decided to start a petition to the School District of Philadelphia for using the term "Berber" to label the language of Amzighen people. The term “Berber” is offensive. It was a label given by the oppressors (list colonizers) of the Amzighen people. The word “Berber” (derived from Greek word for barbarian) refers to the Berberian people. Amazigh means “free people'' in the Indigenous Tamazight language, it's an important cultural distinction. Language screeners are a first step in enrollment in the School District. This change will stop Amzighen students who attend Philadelphia public schools from encountering an offensive term during their first days in the district. Changing this offensive label will also send a message to the Philadelphia Language Community that the School District of Philadelphia stands with indigenous peoples and supports the local Amzighen community. I worked through the Research phase, gathering information from all different types of websites with different languages. My father’s side of the family which is 100% Amazigh finds it offensive. I ask that you sign this petition asking the School District of Philadelphia to change the label for the language from “Berber” to Tamazight. http://chng.it/2StdjwsnkH 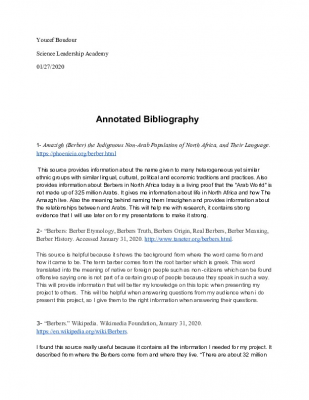