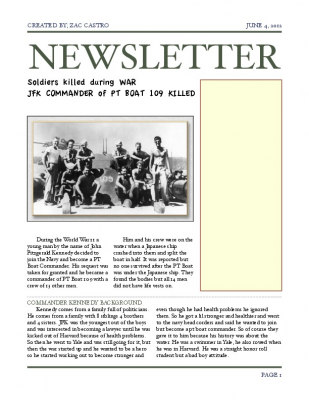 My project is about what if JFK died during the war?

The future i visioned was mostly that we would most likely have a different way of war. Cause JFK wasn't president so i would say that we never would've invaded cuba for the missiles. I say there would have been a missile war also if we didn't threaten Cuba and Russia.
What i like about this project was that i got to change history in my own way even though it didn't happen but i could picture it sorta. I think picturing the future at first was the most difficult cause i mean its kinda hard when you change how something that has happened but not the way history says.
i liked how they gave me detail on my research on how he went to harvard and was forced to leave cause of health problems but then went to Yale and joined all these sports and then out of no where wanted to join the navy and become a leader and he basically did everything he wanted to do.
I think my project could be improved if i had added a little bit more of details and explained some stuff.
If i had to do this project again i think i would have changed how he was killed or make something like he was captured and held hostage and is still held as a prisoner. and make some exotic crazy story to get people all hyped up.