For my capstone, I wanted to get a community more involved in the environment. My goal was to use the skills I had learned from CTE- engineering, and design a system that creates opportunities for the community to learn more about the green around them. The community I hoped to impact was a community garden residing in University City. My plan was to design a self-sustaining self-watering system for plots in the garden. But after being denied the space at the community garden, I turned to a different community. I decided to implement my design into my own school’s outside terrace. Because I moved the space, I also decided to simplify my design so that any student or faculty member could use it. The garden would be able to both collect its own rain water and disperse the water automatically throughout the day, or as much as needed. Through the project research; I learned how to collect rainwater safely, how water flows and moves through piping, how to code a timing system, and how different plants grow and what they need. Though the design went through some major changes, the final product works and fits with the outside space perfectly. With the plan of going further with the project, I hope to get the word out about the design by using a website I have created. There is so much that this project could do for the SLA community. The possibilities of this project are endless, but it just needs that final push.

The movie Psycho is a magnificent horror/thriller film created by Alfred Hitchcock. The suspense aspect of the movie was something never experienced before. Hitchcock had the ability to keep his audience in the dark until the moment he needed them to notice. This created a great horror movie that became a classic in a line of suspenseful thrillers. When it came to the marketing, specifically the movie posters, the same skill was used and most of the posters were vague. The original poster only had three of the characters in the movie and the title of the movie. The position and expression of the characters give no window into what the movie is about at all. There are no items that you would expert in a horror movie poster like knives or blood. In my personal opinion, the poster is rather boring in how it looks. The other marketing poster put out was about the “Rule” of watching Psycho. The rule was that you had to be there when the movie began, and that you would not be allowed in after the movie had already started. In all, the marketing was horribly vague and uninteresting. I think that because of the vagueness and mystery behind the posters, it drew people to go and see it. It was something to discover, like an adventure. For my take on the poster I wanted to keep the mysterious aspect, but make the poster a bit more captivating.

When making the poster I wanted to focus on the killer in the movie, but making sure to keep the identity still a mystery. Alongside the killer I decided to put two icons of the movie in the poster, the house and the bathroom drain. As for the color scheme, because the movie itself is in black and white, the poster should mirror what the movie is like. I wanted the viewer to get a good sense of what to expect, but keeping in the dark how the two silhouettes and icons correlate to each other. The “mother” I decided to be the looming figure over the entire scene. She is the mastermind of the scheme while the son, the tiny figure by the house, is weak and small looking compared to the “mother”. The house itself leaks in the drain below to signify connection. The also has something else draining into it, and to the viewer that liquid could be anything which keeps the surprise of what that liquid actually is. As for the title, even though Psycho is a great title, I wanted something that captures the villain of the movie. Mother is Home gives the sense that “mother” was not there before. As to say that this character is unwelcome, in a familiar saying we all know. 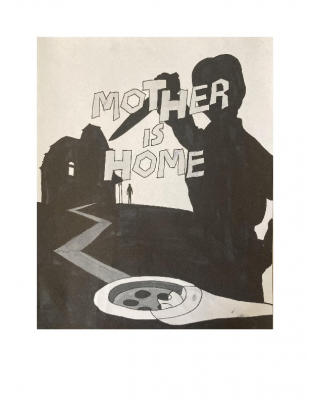