For my capstone project I raised money doing " magic shows " for the SLA boys basketball team. I wanted to combine two things I like in something fun.

I created contact with my Equatorian friend's host family, and theywere the ones who helped me in stting up the events. In the first three weeks, I just performed in block parties; they would hire me to entertain the people, but the last one was something bigger. They took me for a booth where I had to attract people to their tend with my magic tricks. They made announcements and everything for me...

At the end of the project I raised 400$ which was the amount of money that I had combined with Mr. Kay ( the basketball coach ). With this money he could purchase new jerseys for the boys.

The project was a success! The project helped me in creating new firends, contacts, opportunities, etc. At the end, I could notice that I was a lot more confident in performing and handling the crowd, which helps you in express yourself better; and of course... the improvement of the language since English is my second one. 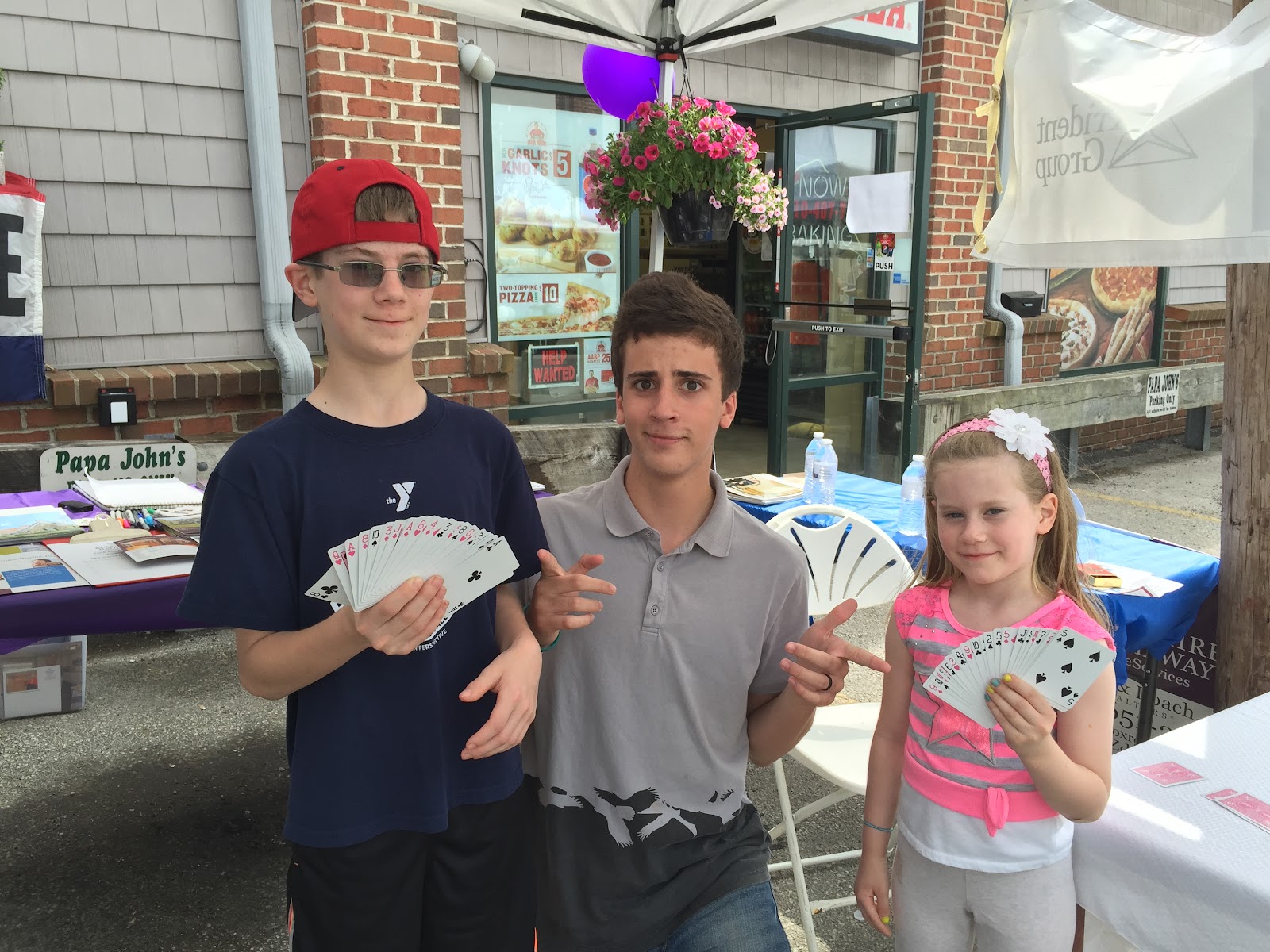 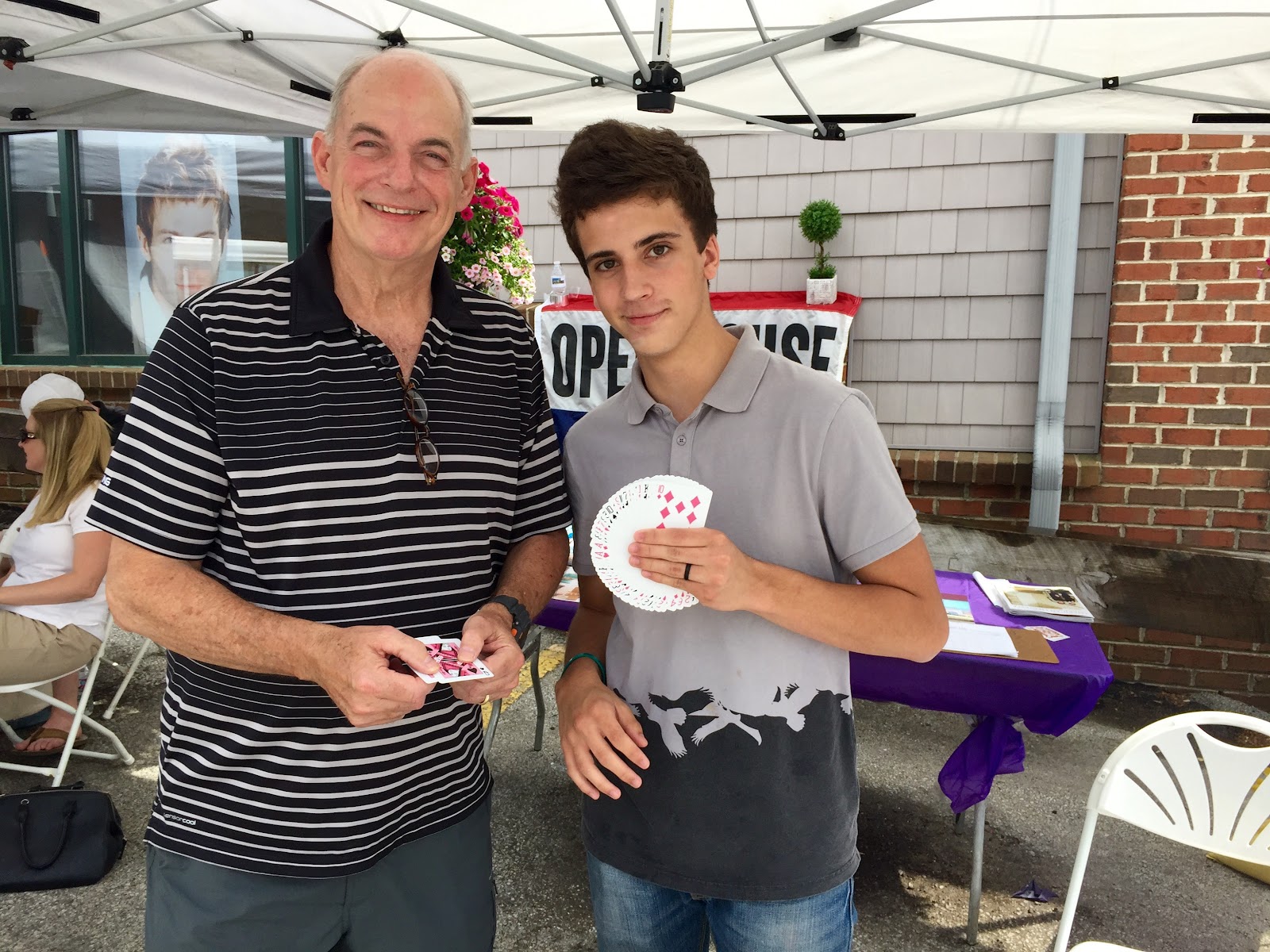 I selected this source because the 3 most important things for you to become a magician , or if you want to become one, are : The performance, skill ( sleight of hand ) and EQUIPMENT. Since I began studying magic , I always had difficulty making certain movements with the cards , and I was often annoyed because my movements were not equal, as the magicians that I admire. So after I discovered that professional magicians used this deck brand , I ran to the internet to see if they had a own site .Having the right equipment makes a big difference, with the right deck we are able to make techniques and advanced moves that leave people impressed , thus making the performance at another level , because the only thing you want to do while does a magic trick, is to impress the audience .

This source is extremely important, because I think it was because of it that I had this desire to learn all I know. At the beginning of my life as a "magician" if I can say that... I did not want to do anything that was connected with magic, I just wanted to do "cool" things with a deck, which are called "cardistry". It was in this video I started my passion for cards and so it was taking me to what I am today.On the page of this video, all the others videos that were related, were about magic tricks, then one day I was interested to a trick that was called: The ambitious card, (which is now a performance I do all the time) I clicked and so it all began.

I selected this source because this magician called david blaine, is my mentor. All I know is because of him, I watched his performances so much that now I perform exactly like him. It was at this particular show, he did with celebrities like Kate Perry, Kenye West ... I started to like him, because everyone likes magic, but to see a magician doing absurd things with stars that we love, makes us, want to do the same.

Whenever I see, and  think something is cool, I do not content myself with only watching, I want to learn, and that's my motto of life, if I can say that. Now I can take the same people’s  reaction, that he was taking from those people on that show.

I found this source very useful because in my early days as a magician, because I wanted to be a pro with cards, I did not want to make big shows on stages and things like that, so I thought myself to be a card magician. In this video we see David Blaine( the magician) performing what we call, street magic, which for me is the best kind of magic, because we go on the streets, and we ask random people if they want to see something amazing with simple objects, like a cell phone, a balloon or a pack of cards.

This source is, and was useful for me, because while i was practicing it was in this Youtube channel that I learned my first magic moves, the guys who used to make the videos, used to make tutorials, for basic sleight of hands techniques. I started watching his videos to learn amateur card tricks. With time passing I realized that those videos was , becoming very " basic" for me, so then I started to read books, written by great magicians, because I wanted to upgrade level as a card magician. Because it is in old books that we study the true secrets of magic.

Most of my sources are videos, and in this video source is very useful because, the guy that presents the video, give us tips for people that wants to do street magic. He give us very good tips, about how to approach people that we never met, performance tips, how to handle the crowd etc. When I was back in Brazil I made a street magic video with two other friends, and It was one of the coolest thing I've ever done, and in this video that I mentioned, the guy says things that you really need to know, things that I had to do in my street magic video, so it worth it check it out.

This source provides us, cardistry.

Cardistry, is nothing more nothing less , than fancy moves, and techniques, that you need to learn to be a good card magician. Because once you are skilled with cards, the first thing that you need to do, is to show the audience that you are good, we need to show them that we are going to do something amazing with the cards, we are not going to do a amateur trick. This is very important because if you make cardistry moves (before you perform the magic trick for it self), for someone, this person will expect something awesome, and then you will have a better reaction.

I found this source useful because, the guy that is talking in this video is a photographer, and he is telling us how he asked random people on the streets to take pictures of them. And he told us how he accomplished that, in one of the coldest city in the world, which is New York. And this is very useful because when we perform street magic we must know those same things, because it is the same concept. We need to be quick, precise and do something remarkable. Make the the day of those people.

This source provided me information about how to create an organized and successful fundraiser. I have been doing card magic for a long time, but I have never done it to make a profit and help others. Because of that I will need to persuade the viewers to give me money. This will mean that I have to be very charming and respectful. I think I will be able to get them to pay me because the money will go to the SLA basketball team and my tricks are impressive. One limitation to this site is that it is not made for small events like mine.

This source is useful because it give us a few exemple tricks that we can do while performing on the streets. Because once you are on the streets we need to be quick, we can not take so much time of the audience, so in this source we can select a few tricks that are very good for this condition. One limitation that I found on this source, is that at the examples,  there is just a few card tricks, and I wished there was more so I could have more ideas, since I am a card magician.

Instructions on how to make Pasta al Pesto

1. Boil pot of water. Put a pinch of salt in the water.

2. Once water is boiling, put pasta in the water for about 8-10. You want the pasta to be a little bit had and not extremely mushy.

3. Once done cooking the pasta, strain the pasta.

4. In a large serving bowl, put your pesto at the bottom and put 1 table spoon of water to make the sauce creamy.

Since most people do not make homemade pasta, the pasta used in this meal is almost all processed. Pasta is made of mostly flour, eggs, wheat, in other a lot of gluten. However, the pesto is 100% whole foods if you get it fresh.

In one box of Barilla, there is about 8g of fat, 336 carbs, and 0 sugar. The carbs and fat will cause weight gain but also a lot lipids to fight of viruses. Carbohydrates give your body with a lot of energy that we our bodies need. The process of how we digest pasta is quite simple. As soon as the pasta hits the tongue, the saliva immediately starts to breakdown the carbohydrates so it is easier to go through the stomach.  The cell walls and acid then deconstruct the pasta. Eating pasta everyday is not a good idea, it will make you gain way to much weight, and too much gluten isn't good for you.

The pasta was probably made in Italy, but they probably got some of the ingredients from other countries in Asia. Since Barilla is such a large company, the pasta was manufactured  commercially.

This is a pretty cheap meal, because pesto costs about 7$, and then box of pasta is 12$. A whole box is about 500 grams, which feeds 4-6 people. So per person it would be out 4$ per person, if there are about 5 people.

Making pasta at home takes a lot time, effort and precisions. I think that just buying a good brand of pasta is a lot more convenient. Especially since it takes so long for the pasta to go bad, so you buy a lot at a time.