In my first You & The World blog post, I discussed the mental part of addiction, how it affects your brain, and what specifically in your brain causes you to fall into addiction. I also covered how addiction affects your whole life; relationships, friendships, and career. The last thing I addressed about addiction was how it directly relates to crime and the way addiction ruins your will to be a good citizen. You can find the link here if you missed it.

As I continued researching about the issue, I started digging deeper to understand the ways America is fighting addiction, and I formed my own opinions on each tactic.

The first source I came across was “10 Ways to Combat America’s Drug Abuse Problem”. In this source, the author focuses on ways to support recovering addicts, and also ways that America could prevent deaths at the hands of addiction. They start by listing ways to reduce addiction deaths by doing things such as: providing easier access to Naloxone (a nasal spray that blocks deadly respiratory suppression caused by many drugs) and identifying who is making these deadly drugs easy to access. The author then lists ways to prevent addiction in general: spreading awareness and education to people around the country. Some of the last tactics the author suggests consist of making access to rehab easier and bettering medical treatment for addiction. The author concludes with a reminder to keep hope and understand that recovery isn’t easy, but it’s possible.

I believe that this first article’s advice for combating addiction is incredibly helpful and very informative. I think addressing it in a way that would prevent addiction as well as supporting people who are already struggling with it is smart.

The second source I read is titled “Ways to Increase Awareness About Addiction and Rehab”. This article discusses ways to personally raise awareness about addiction on your own. It starts with suggesting education upon yourself and others. It also talks about getting involved with the community and helping spread the message. Following legislation surrounding addiction is suggested as well, and the article emphasizes that every voice counts when it comes to addiction and the government. The article concludes by explaining that sharing your story with addiction is incredibly helpful to yourself and others.

I think this article is also very useful when educating yourself on how to spread awareness about addiction. It mainly focuses on the idea that every person and every voice matters, which I totally agree with.

What I did for my agent of change was donating to an organization that directly helps people recovering from addiction. I gathered a good amount of necessities (suggested from the organization for donating), and I dropped it off. I chose to do this because I figured it was the most I could do that would actually mean something. I didn’t want to donate money because I wanted to ensure that the things I donated would be actually directly helping people and it would be more personal. The experience was pretty easy, but it was really fun and it felt like I was making some sort of change or difference, even if it was small.

I felt pretty good about doing this project. I think I chose a good topic and I believe that I did the most I could with the time given to fight the issue of addiction. I learned a lot about the way that addiction affects the brain and I definitely understand addiction on a deeper level than I previously did. I could’ve spread a little more awareness on social media, like maybe if I created an instagram page dedicated to spreading awareness about addiction. I can still do that though. I hope in the future I can collaborate with more people, like collecting donations from my friends and then donating to the organization, but I didn’t think of that very early, so I thought I wouldn’t have enough time/I wouldn’t have enough donations or any at all. I’m still very proud of myself and my project but there’s always room for improvement in the future.

Usually, when I start brainstorming for projects, the first thought that comes to my mind is, “how can I make this about my life, specifically?” That really wasn’t the case with this project. I’m not addicted to drugs, I don’t struggle with alcoholism, but I was surrounded by these types of addictions in my family and in my city, I believe I’m quite familiar with the issue.

Home to opioid users in Philadelphia

I believe that educating more people about it will create a safer environment for people who genuinely need help, and it will also better us as a society, moving forward into the future. But first things first, communication and comprehension are key when it comes to understanding something you’ve never been through personally. Don’t enter your opinions anywhere they’re not needed.

The first thing that comes to mind when discussing this topic is the harmful assumptions our society has created involving drug addicts. The main assumption about drug addicts made by people who are totally uneducated on the topic—they have no self control or willpower. This is so far from the truth. Addiction is a relapsing disease, it’s literally a mental illness. People in society tend to respect people with mental illnesses more than people who suffer with addiction specifically. It’s literally the same thing.

Anyone with the slightest bit of knowledge will know it’s not as easy as simply choosing not to take a drug anymore. The brain has something called the “reward circuit”, which is commonly discussed while exploring the topic of addiction because it interferes with the way someone lives, making them believe they are incapable of living without this drug or substance.

To dig a bit deeper, I researched about the way addiction affects an individual’s personal life, their relationships with their family, friends, and/or job. Becoming addicted to a drug or substance affects the people around you, which is why many addicts don’t have many people there to support them, making it harder to confront their addiction. There’s only so much people can do for family or friends that struggle with addiction, and they get tired of it, causing them to give up on a person entirely. From someone who has family members with a past of addiction—no one wants to see or be around someone who is clearly not sober.

Addiction is directly related to things like crime, family problems, abuse, mental health issues, and financial struggles. When someone is intoxicated/on some type of drug, they’re more likely to commit some type of abuse, which relates to family/friends/partners, of course because they’ll be the ones dealing with it. Family and financial problems caused by addiction are sorta tied together, so they affect each other. Overspending on drugs/alcohol creates financial problems, which eventually leads to family problems.

Addiction is linked to so many things that we’re blind to. It affects everything, every aspect of your life, sometimes without you noticing. I’ve already learned so much about addiction just with the little research I’ve done so far. I used to be quite ignorant to the issue, but this project has opened my eyes wider than I expected.

The idea that heavily influenced me when choosing my topic and writing about it, was Trevor’s connection and appreciation to his mother, and also Patricia’s way of living. In Born a Crime, we often see or hear about Trevor admiring his mother for her ways, and that inspired me. If Patricia could be strong and brave (which she’s not supposed to be) during such a bad time, I can too and I wanted to explore that. Trevor explored his own sense of identity in many different ways, but most of the time, it was his racial identity. He did this by feeling around to see where he felt comfortable, where he relates most, and most importantly, just not fitting in anywhere and finding peace and acceptance in that. In chapters 4-6, Trevor has a moment where he believes he fits in most with the black kids at school, because he could unapologetically be himself. Later in the book, he talks about how some black kids don’t accept him, same with the white kids, so he fits in with the “colored” kids, even if that’s not truly who he is, it was just easier. Very close to the end, Trevor goes to jail and decides to stick with the white people because they “look harmless”. It’s like a never-ending cycle for Trevor, and he just usually goes with what he feels that day. A part or quote of Born a Crime that I resonate the most with is “I was blessed with another trait I inherited from my mother: her ability to forget the pain in life. I remember the thing that caused the trauma, but I don’t hold on to the trauma. I never let the memory of something painful prevent me from trying something new.” I relate with this the most because I’ve had terrible things happen to me, but I don’t let it affect my current life. I had terrible social anxiety, still do, but it’s toned down a bit because of the people around me. Trevor’s writing style inspired me a lot, and I tried to copy him in a way. Trevor spaces his paragraphs more often than me, so I tried to space my paragraphs a bit more. Trevor also writes like he’s talking to someone who has no context of anything, which is also something I tried to do. I stayed on the serious side instead of being humorous, which differs from Trevor’s storytelling techniques. I wanted the reader to understand that I do take this subject seriously, and I would hope they would too. My vignette addresses the question of how our cultures influence our identity. 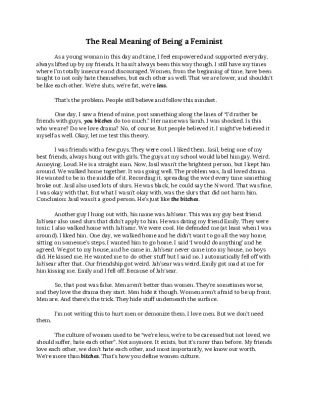