Posted by Nathan Kamal in Digital Video -4 day a week - Herman on Friday, March 9, 2012 at 10:50 pm
Drive, a 2011 film directed by Nicholas Refn starring Ryan Gosling, follows a Los Angeles stuntman who moonlights as a getaway driver for criminals. The film is a traditional heist-gone-wrong thriller, paying homage to numerous action films of the late 20th century.

Gosling's character, who remains unnamed for the duration of the entire movie, falls for Irene, a single mother, and when her ex boyfriend, Standard (whose thematically symbolic name is obviously not a coincidence) is forced to rob a pawn shop, the driver offers to help. The relationship between Driver and Irene was probably the most poignant in the film. The actors had very little dialogue onscreen, but still managed to establish a high level of complexity with just their body language.

Gosling keeps his hands in his pockets for a noticeably large chunk of his screen time, and maintains a constant nondescript, passive expression. I think that his control is what makes his character so fascinating. He manages to give his character a level of softness for the entire first half of the film. This creates a great deal of tension for the viewer, who knows what a dangerous man he really is. This tension is finally broken with his line "I'll kick your fuckin teeth down your throat" delivered to a former colleague at a diner. It is this line, in my opinion, that starts the second act of the film.

Refn spends a great deal of effort referencing other bodies of work. The central chase sequence, after the robbery occurs, is highly derivative of what is seen in Bullit in 1968: low angles of muscle cars, no music, and roaring engines. He also is heavily influenced by the work of Martin Scorsese, having dedicated the film to Taxi Driver. In fact, the film ends in a similar way: in trying to help a woman who he has had little contact with, he faces a near death experience, brutally killing everyone in his path. Like Taxi Driver, the climactic scene ends with him critically wounded, but still victorious, and, like Taxi Driver, there is ambiguity regarding whether he survives, or whether he dies and the final scenes are merely a dying vision of sorts.

Driver's transition from a cold, disconnected, businessman into a mythical superhero plays a very apparent role in the film. For instance, when he kills Nino, a Jewish gangster who originally blackmailed Standard, he wears his stunt-double mask. While he obviously doesn't need to hide his identity in order to kill him, there is still something inside of him that is ashamed. Perhaps this "hero" identity is not something that Driver is particularly fond of, having spent his entire criminal career emotionally detached from his crimes, and therefore the mask represents his discomfort around moral responsibility.

The soundtrack of the film, composed by Cliff Martinez, is heavily influenced by 80s pop music. The lyrics contain themes of heroism and redemption, emphasizing Driver's moral transformation throughout the film while at the same time trivializing it.

There is, however, a part of me that feels squeamish about such a heavy amount of homage. It seemed almost as if this film wasn't Refn, but more a "greatest hits" playlist of his predecessors. And while it can certainly be argued that all art is derivative, and therefore unoriginal, Dive does it in an incredibly self-conscious way. I see Drive less as a stand-alone film, and more as a comment of filmmakers of the past. I may need multiple viewings to decide how I feel about such a high amount of throwback.

But what makes Drive truly shine, is the film's iceberg approach to storytelling. By only explicitly revealing 10% of the film's identity to the viewer, the other 90% is up to us to decide. Refn is truly a master of minimalism, telling us a lot by only showing a little. Everyone has a something inside of them that drives them to do even the most radical things, and that internal drive is what makes this film so relatable, so heartbreaking, and so damn fun.
Posted by Nathan Kamal in Digital Video -4 day a week - Herman on Thursday, January 26, 2012 at 10:41 pm
Eastern Promises, made in 2007 by esteemed director David Croenberg, follows a midwife and a series of events that lead her to discover evidence contradicting members of a Russian crime family.

The film takes place in London in the dead of winter, and opens with a grisly murder of a rival mob member in a barbershop. Meanwhile, a midwife, Anna, at a local hospital delivers a baby from a 14 year old prostitute working at the headquarters of the local Russian mob. The mother dies, and Anna, hoping to trace the girl's diary back to the girl's family, goes to the address of a mob-owned russian restaurant found on the girl's person hoping to get the diary translated from Russian into English. Eventually, she learns that the diary contains evidence that Semyon, the mob boss, raped the girl.

The mob, to cut ties with Anna, intimidates her, suggesting that she return the baby to them. Anna is faced with the decision of giving the baby back to the mob and secure her own saftey, or to gain custody of the baby herself.

The majority of the interactions of Anna and the mob occur through Nikolai, the family "driver" who also disposes of bodies. He is clearly conflicted in his decisions. The Russian mafia, more than most crime organizations, are intent on absolutely desensitizing their members from any human emotion at all, and to see Nikolai in this dilemma makes him by far the most complex character.

One scene in particular stands out from the rest of the film. Nikolai, while meeting a allied mafia member in a sauna, is mistaken for another member of Semyon's family, and is attacked by two men with linoleum knives. The result is a bloody knife-fight, ending in both sides earning brutal wounds. The scene is truly gutwrenching to watch, and the vulnerability that Croenberg extracts from the character makes the viewer truly reflect on the nature of violence in the media. Nikolai is naked for the entire scene, and this somehow makes the viewer's natural response to the violence even stronger.

Perhaps Croenberg is making a statement here about our own vulnerability, as humans, and how not even something as thin and flimsy as clothing can save us from the inevitable blows of knives. Maybe the reason that at times I had to look away during this scene, is because there is something in all of us that can relate to Nikolai, as he is attacked in the nude, his thin shell of protection torn from him.

Croenberg, through filmaking techniques, superbly conveys this "shell" from the start. The language used by the characters is blunt and sterile. His choices in lighting are incredibly desaturated, reflecting the sterility of the culture of the Russians. He often plays on the viewers sensitivity to violence, bluntly showing all the murder scenes in close-ups and medium shots, leaving nothing up to the viewer's imagination. The only time Croenberg truly breaks through the shell in terms of filming is with the musical score. The orchestral score is heavily influenced by Russian folk music, often featuring a singing violin. Additionally, cheerful traditional Russian music is heard in the background of many scenes, providing profound contrast to the cruel acts happening onscreen.

This is a haunting film, not for the faint of heart. Its violent portrayals of sex, friendship, and family are sure to keep any gangster-film novice up for a few hours. But, as should always be the case with violence, Croenbergs vision is artfully executed.
Posted by Nathan Kamal in American History - Herman on Friday, June 3, 2011 at 8:29 am
For my Q4 Benchmark, I researched the history of technology in music and examined the goods and evils of advancement of this kind. My project will be an oral presentation with visual aids, but below is an abstract of my project, on which the presentation is based. 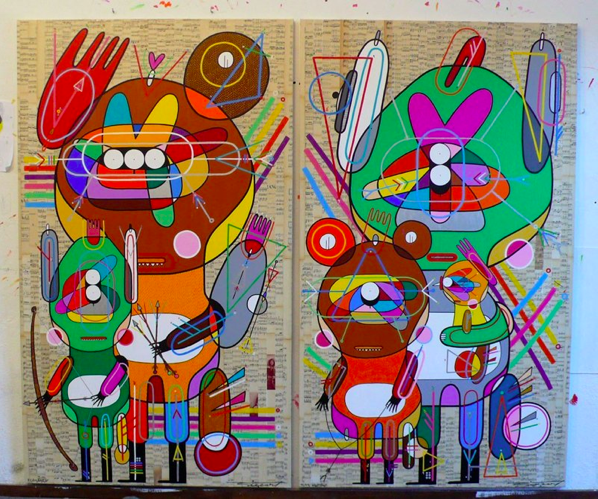 Posted by Nathan Kamal in American History - Herman on Friday, November 5, 2010 at 8:29 am
We created a website that we hope will make the community aware of the importance of local economic diversity, and the positive impact it will have on Northwest Philadelphia.