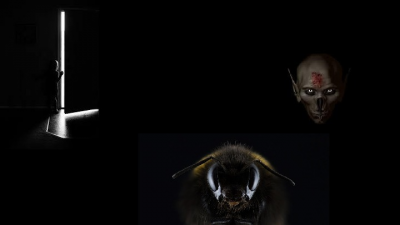 I would firstly like to discuss the reasons why the images are placed the way they are. I actually wanted to create a little bit of a depth effect (this is also why I choose the black background). I also took some advice from the Zen website provided to me which included one slide one point, contrast rules, and making it visible. I wanted to make something that makes the viewers take a double look and wonder why I created it and why are there so many odd photos, what’s the meaning?. While I would prefer viewers to use their own creative skills to find out the meaning of the slide, as with most slides the theme is pretty obvious from the first glance.

While positioning the images I also considered my theme and decided it would be best to position them in my opinion in the most descriptive and emotional way possible. The reason for the creature in the background that looks like a demon is actually there to symbolize me! Me being extremely antisocial I usually just sit in the back of the class quiet and observing my classmates. Finding out what they’re really about so I can know what i’m getting myself into if I do decide to talk to them. The reason why I put the bee so close is to symbolize my more playful and silly side for if I know you well this is what will be displayed by me most of the time. Now, you’re probably wondering about the door with the curious child looking in it up in the top left corner. That was meant to be far away, as I mentioned above i'm extremely antisocial and even my friends that think they know me actually have no idea what i'm truly about. They usually take my kindness for granted and one day they may see me change and stay that way for as long as we're friends.

Now, you’re also probably wondering why I choose such odd images to create my slide. As I said in the second paragraph, the bee is there to symbolize my silly personality but also because i’m a huge fan of the subject Entomology. The door with the excessively nosy child as also mentioned in paragraph two is there to represent my true personality which is locked up and will remain in its cell until I find the right people to expose it to. And finally, the reason for the demon are numerous. One being the fact that people never tend to notice me and by my actions/hobbies being different from others really just make things worse. So instead of finding someway to change myself I sit back and see who I believe would make a good associate.

Your slide needs help. You should fix the way evrything is black i understand why its like that but still like add other colors like dark colors to your slide.