Posted by Luke Watson-Sharer in English 3 - Block - E on Monday, March 21, 2016 at 9:04 pm
A lot of my ​decision making and approach had to do with being honest with myself and to our prompt. When we began this unit I had a strong opinion for myself being a non interventionist so my goal was to consider other opinions as well. During my research I looked at other opinions that did not have to do with mine. I hope that I had a good a approach and my goals is to remain honest. Reflecting on my work my process could've been better as I missed class peer edits and only received 1 from another student although I asked others (I peer edited someone else's).

When we started the unit on war and how it not only affects soldiers but ideologies and people, I thought I could develop an “outside of the box” idea. I would defend the glory of revolution and, like the novelists, inspire change. Then, I realized my proposal may be blindly patriotic, or at least misinterpreted,  and too simplistic. Some authors celebrate revolutionary change by describing extreme denials of individual and community rights.  The descriptions are frightening.  Their books are best sellers and franchised  into movies. Meanwhile, similar conditions, although possibly not as extreme, occur in the United States and around the world.  Those in power may rally against the extremes described in the books but they are also denying individual and community rights. Works of fiction, often celebrated, may inspire revolutionary thoughts or radical ideals but, in practice, our society too often practices the dysfunctional and inequitable societies described in the novels.

During the mid to late 20th century, a number of works of fiction celebrated, or at least encouraged, revolutionary change or put a light on extreme compliance with government.  For example,  1984, The Hunger Games, Animal Farm, Fahrenheit 451, and The Giver, have been celebrated for their genius and importance to literature and/or  film. Most of these works have common themes:  militarism/war, censorship, obedience and various forms of oppression. In the dystopian novel, The Hunger Games, there is an all-out war between the districts and capital, knowledge is censored, people are denied access to “the forbidden zone”, and people are inspired by few revolutionaries such as Katniss. The Hunger Games is celebrated as a work of  “genius;” the conditions described in the novel are denounced as savage or at least unstable. At the same time, in the the real world, if a few people rise against the oppression of militarism and extreme censorship with a other few revolutionaries,  they may be labeled violent extremists. This characterization is false because those in power determine who is “extreme.”  For example, the United States government labels Islamists as terrorist yet some of the Islamists are challenging governments that openly censor, restrict movement of people, and detain people without due process. Who gets to determine what is extreme and what is “proper” forms of revolutionary change?

The 20th century literatures I have listed primarily feature forms of extreme oppression that homogenize society; sameness is a goal.  For example, the censorship in Fahrenheit 451 includes burning books and labeling reading a heinous acts. Currently, the Islamic State of Iraq and the Levant (ISIS), has destroyed ancient artifacts attempting to erase thousands of years of history.  In The Giver, only one man can see color or memory, as the “Receiver of Memory,” to ensure society preserves order and structure. Today, political rhetoric in the U.S. presidential debates often focuses on U.S. “greatness” and maintaining law and order.  If these are examples of oppression that should be opposed and rebelled against,  why aren’t they consistently opposed today?  While the U.S. is quick to rightly condemn the action by ISIS, isn’t the message of many candidates during the U.S. presidential debates also frightening and condemnable? Although what occurs in the United States may be more subtle or camouflaged, there are examples of censorship. There are also examples of praising order and structure for the preservation of those in power.  The United States has the  largest military in the world; the U.S. has or has attempted to overthrow 50 foreign governments since 1945 from Cuba to Angola to Vietnam.  Currently,  the National Security Agency (NSA) reads and monitors internet activity and phone calls including leaders of foreign governments to U.S. citizens.  People fighting for the rights of the people get ignored or dismissed by the mainstream media. During elections, some voices are silenced or labeled too extreme and too idealistic. Do not we see commonalities between our world and the stories we are encouraged to celebrate?.

Throughout history, those in power, “the establishment,” want to maintain their power. Sometimes, the conditions are extreme like in 1984:  never ending war, government surveillance, self-serving political leaders, and control of the people’s thoughts and actions. In the United States, we are assured 1984 can never happen. The United States began with a violent revolution  against colonial oppression to create a “free” nation “of the people, by the people and for the people.” This narrative is reinforced in the national anthem, the Pledge of Allegiance, many textbooks and in political speeches ending in “God Bless America.” But the U.S. government and modern day multinational corporations make this difficult. During British colonial rule, there were limits of economic and political rights for the elites.  Post revolution, there was still enslavement based on race and extreme poverty and denial of basic rights for most people. Today, the intersection of the U.S. government and multinational corporations leads to lack of workers’ rights such as a living wages, limited free speech as in the case of Edward Snowden and perpetual wars from drones to on the ground invasions.  While 1984 is celebrated as a novel, conditions condemned in the novel exist. 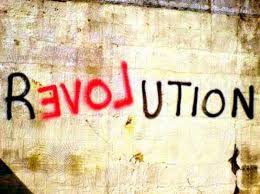 This is an important image that I felt continues to be powerful. I believe that this relates because as it’s uninspired partially by a violence part that many who believe in the cause for non violence but revolution on behalf of the people shows that there’s a possibility of a peaceful revolution

Why do we celebrate novels that challenge oppression and the powerful while accept inequitable and oppressive conditions?  Do too many people accept establishment politics as inevitable and therefore accept the current political system?  Would many people support even a nonviolent revolution?  Nonviolent revolutions, including the movements that expanded civil and economic rights, are necessary if we want to restore the rights of the people to rise against crony government and corporations. We have to do more than celebrate novels or novelists who write about oppression. A nonviolent revolutions can make visible the oppression and collaborate for concrete change.  This has occurred and is occurring around the world but, like the conclusions in many of the novels, injustice prevails.  Maybe, an “outside the box idea,” is to collaborate on making the novel a documentary - not just another movie.