When deciding upon an Capstone, my fellow group mates and myself knew we wanted to create something both interactive and interesting, not only for us, but for others. Having been involved in The Franklin Institute’s Project SPACE program as volunteers for a few years, we thought it’d be a great idea to showcase what we’ve learned as a part of the program and at the same time extend that knowledge to others. Our capstone was to teach an astronomy-based mini-course to SLA freshman at The Franklin Institute. All having a different area of expertise, we decided that we each have our own week to teach what we wanted in the course. The process of becoming more familiarized with the content than we’d already been was fascinating. We were given tremendous opportunities to work with great minds in the fields of science, astronomy, and astrophysics. Although we all put in many hours doing research and organizing our course content, the most challenging part was creating a lesson plan that students would enjoy. We each taught two classes, the first four weeks would be one group of freshman, and the next four a different bunch. The point of this was to show growth, comparing the first time to the second to see what we had changed. The main goals we set out to achieve were to educate students about astronomy and all its wonders, but at the same time inspire them to actively pursue additional knowledge of it.

Link to my Teaching Plan: https://docs.google.com/document/d/1SdQGbz-O3dNiEt8kJfmiEz-fIAsehmdilfPN6PjSwDw/edit 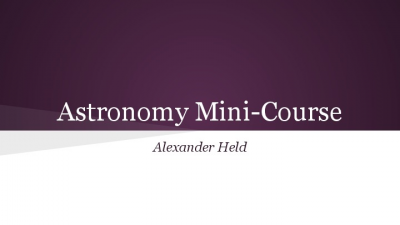 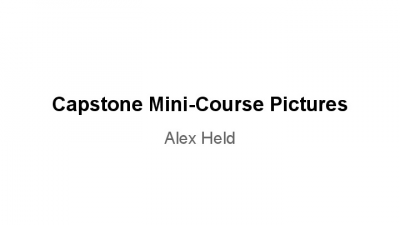 Miriam “Mimi” Fuchs is an employee at the Franklin Institute, who specializes in the study in red dwarf stars and most umbrella terms in astronomy. She and my group have collaborated over the past few months, along with Dr. Pitts and Dr. Stovall, on how the course would be run with what would be taught. She has given my group and I many idea for content and some suggestions for activities that will engage the audience. In our most recent meeting on Friday 1/23, she gave me and idea for an activity that would explain the way a reflecting telescope works and on a more basic level, the images that bent light creates. The idea of the activity is centered around the simplicity of the directions and the basic premise of bending light so that anyone can understand how a reflecting telescope functions without any confusing terminology or past experience necessary.

Learner, Richard. Astronomy through the Telescope. The 500-year story of the Instruments, the

This book covers the 500 year development of the telescope in astronomy. It touches on important figures and crucial points in history that were essential to the progression of telescopes and astronomy overall. The book begins with the 14th century and ends in the 18th. The 17th century was the most important time for telescopic advancement, as many of the greatest minds in astronomy and physics like Galileo, Newton, and later Kepler, developed designs that inspired some of the most famous creations in astrophotography like the Hubble Space Telescope.

This website offers its viewers a look at the universe through different wavelengths of the electromagnetic spectrum. Spectroscopy is the study of how matter interacts with radiated energy. Typically, through this process, astronomers via telescopes are able to classify different types of stars through the elements they have inside of them, which are seen through different colors of light and wavelengths. This website is a fascinating and educational tool for showing students how the electromagnetic spectrum works and what spectroscopy is. Many activities could be centered around this website, specifically asking students what changing the wavelengths setting allows the viewer to do. The answer would be allowing the viewer to see celestial objects emitting different types of electromagnetic radiation and that we can only see certain thing under specific wavelengths, (i.e. x-ray stars’ light can obviously only be seen in the x-ray wavelength).

Dr. Derrick Pitts is the Chief Astronomer and Planetary Director for the Franklin Institute. He graduated from Germantown Academy in Pennsylvania, then pursued his Master’s degree from St. Lawrence University in Canton, New York, and then finally received his honorary Doctorate in science from the LaSalle University in Philadelphia, Pennsylvania. Derrick Pitts is also my mentor for my capstone, as well as serving as mentor for the other members of my capstone group. He has been and continues to be a great resource for me. In a debrief meeting that he and I had last Friday, 1/23, we spoke of the ways I could improve my understanding of how the content that i am teaching and developing different ways to convey that content. He gave me an idea for an activity involving the way light is shifted and even bent as it travels through different mediums. In the example, it asked students to describe the similarities between three mediums that appear in everyday life: water, air, and glass, which the answer was transparency. The activity is an analogy for how reflecting telescopes work and how they see light from space.

Dr. Idris Stovall is the Mathematician and Director of STEM Youth and School Programs at The Franklin Institute. He received his Ph.D in Mathematics from the University of Massachusetts-Amherst. Over the past few months, I have worked Dr. Derrick Pitts and Dr. Idris Stovall, both great minds in sciences. Idris has collaborated with my group members and I about how to course should be facilitated, specifically the meat and bones of courses, like the dates that the classes will be held, and what each of should be focusing on with our individual teaching plans. Dr. Stovall met with my group and I on Friday along with Dr. Pitts. Dr. Stovall gave me a brief rundown of my performance on Wednesday, 1/21, letting me know how I did, giving me positive and constructive critiques. He recommended different forms of reflection that could be implemented into the course. For example, one possible form of reflection he mentioned, which we both spoke about, was giving the students a pre-quiz at the beginning of every class, and finishing the course with a post quiz containing important elements from each individual class at the end of the final class.

This website gives the viewer a fascinating and enriching experience as they are able to discover the journey of the Hubble Space Telescope from its launch to present day, mentioning key points of discovery and astrophotography along the way, as well as few mishaps through through the years. The Hubble website has some incredible resources and even better that can be used to easily turn heads. The website overall provides great insight on how the telescope functions and what it has done for modern astronomy. The content on the site can aid anyone who desires to learn about or convey information to others about the Hubble and its missions.

This website is a great resource that teaches the importance and benefits of proper filtration of telescopes when viewing the sun. Since the sun can obviously cause far more damage to a viewer looking through a telescope without the right filter or one at all due to the intense magnification, it is important that beginners learn the reason for filters and gain the knowledge of which filters they should use for which job. The hydrogen alpha filter allows the viewer to see, yep, hydrogen on the sun. Since hydrogen in its atomic form can only exist on the parts of the sun where the temperature is cool enough, the filter will only show it on the photosphere and chromosphere. Using a H-alpha filter, viewers are able to see things like solar prominences, solar flares, and coronal mass ejections. This is vital for the course because there are two main filters used that telescopes use to observe the sun: hydrogen alpha and mylar, each showing different parts of the sun and different solar phenomena.

This website offers a full astronomy course, covering many topics regarding space and important figures in its history. The specific page I selected covered reflecting telescopes and their development from refractors, as well as a diagram showing how most models work. This is useful for me because refractors and reflectors and the the two most important types of telescopes, even though refractors and antiquated compared to reflectors. Reflectors create an image by bending light with sets of curved mirrors that direct the light towards the eye piece. This diagram is a great segway into an activity that involves comparing the two types of telescopes, refractors and reflectors.