As a child growing up, I thought losing friends to guns was the norm because it happens very often. However, after attending my first Gun Violence Prevention summit in Washington, D.C, I realize that there are people who have faced similar situation as me and it motivated me to used my skills in advocacy into bringing awareness on gun violence in Philadelphia and pushing for better laws across the country.

The goal of this capstone is to give people the feeling that I had when I attend #Fight4AFuture summit in Washington D.C. I want to motivate youth and leaders to make a change by organizing and bring awareness through education. During the time this event was plan, the primary election was ongoing and I thought it was a great idea to educate voters on where all the mayoral candidates stands on violence in Philadelphia. 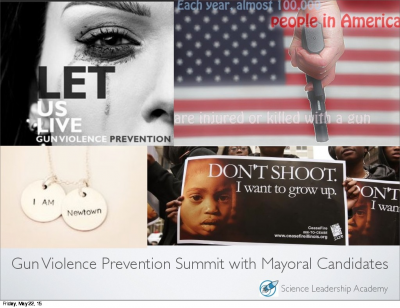 This book is a very useful book for my capstone because it gives me a insight peek on a person named Canada, where violence is used. They promote violence because it is part of the culture that they are raised in. He spoke about how parents encourage their child to solve issue through violence and threats, often time through fight. Canada spoke about how the younger generation are affected by violence. The younger generation started carrying weapon to school, which started a trend where small crimes become big crime. With this book, I have an idea on violence in other place. But also the reason behind it.

Reducing gun violence in America is a great book that also give me knowledge and statistics on gun violence. The main focus of the book is learning ways to reduce gun violence in America which is establishing better laws such as; the universal background check. The universal background check help make sure that whom ever is purchasing a gun have no criminal record or mental illness. The book included an analysis of the constitutionality of many recommended policies and date form the national public opinion poll that reflects support among the majority of Americans-including gun owners- for stronger gun policies.

This is a story of a heartbreaking couple who wife was shot in the head and magically survived. The book is very inspiring on how dedicated Congresswoman Gabrielle Gifford and her husband, astronaut Mark Kelly, share their impassioned argument for responsible gun ownership. With the shooting, congresswoman Gabrielle is more eager to bring better laws into the country. The journey and the obstacle that she face to try to bring laws to protect the Americans from guns. At the end of the book. I am more knowledgable on what to bring to the summit and the obstacle that we will face one day.

Gilbert, E. (2014). Thunder in the Mountains: A Personal Journey Through America's Gun Culture.

Author Craig K. Collins wrote a book about his personal life on the role of guns in American Culture. He explores the meaning of a history – of his family’s and his country’s – that is infused with the culture of the gun. The story begins on a hunting trip Collins took with his father and brothers in the early ‘70s, when he was accidentally shot with a high-powered deer rifle at the age of 13 near the top of an isolated peak in Northeastern Nevada. He tells a personal story of a childhood in Idaho and Nevada, where hunting is a way of life and guns are revered – often with fatal and unintended results. He recalls friends – past and present – whose lives have been forever shattered or altered by the explosive force of a bullet. This book is a great use to my summit because it talk about the danger of guns.

An average of 33 American get murdered by guns everyday and fight4the33 is a campaign that is run through generation progress. #Fight4the33 is a campaign that bring awareness to people to start taking action to address this issue. I am going to promote this campaign at the summit and I hope that people will be more educated with #fight4the33 campaign. Since my other mentor work with me through Generation Progress, I think it will be very useful in the long term run. Which mean recruiting people to organization and as a regional organizer, I can create a bridge of connection.

Join the Effort to #ProtectAllWomen. (n.d.). Retrieved January 30, 2015, from http://protectallwomen.org/

#Protectallwomen is a campaign that protect women from their partner on domestic violence. I am going to promote this campaign at the summit and I hope that people will be more educated with #ProtectallWomen campaign. I also hope to get women involved with this campaign in Philadelphia because a lot of women are being violated by their partner. Since my other mentor work with me through Generation Progress, I think it will be very useful in the long term run. Which mean recruiting people to organization and as a regional organizer, I can create a bridge of connection.

This will be use in my summit by letting people know how successful we have come and to encourage other that this is possible. This source provided wonderful information and fact on what states have establish a stronger law to protect guns. It also keep people updated on the NRA action which is beneficially to the people who are planning actions. This can help strengthen my summit by actually having information and facts.

Five Policies Millennials Want President Obama To Discuss During The State Of The Union. (n.d.). Retrieved January 30, 2015, from http://genprogress.org/ideas/

This is a good source because it provided all the information and statistic on gun violence in the United States of America. This organization have chapter all over the State, such like Philadelphia, PA. In the summit, I want to introduced people to this organization because it is a wonder organization that people can connect with and create a bridge of communication and working relationship. Overall, it is always great to have a source on just statistic in the United States of America.