Angela Yvonne Davis is an African-American female born on January 26, 1944 in the South. Particularly in Birmingham, Alabama. I think being born during this time period and in this particular place it progressed her fight for equal rights. She is well known for her activism under gender equality, civil rights and political issues dating back to the earliest dates of the late 1960s. Her activism sheet would stand as long from being jailed, removed from buildings, joining “radical” organizations and groups to even leading The Black Liberation Movement. The movement, or rather army according to Wikipedia, states that it was a run-off/continuation of the Black Panther Movement.

Ms. Davis is in movies and is also a well-known book writer on the exact issues that she has been though and fought for all her life. Her first book was published in 1974 titled as, Angela Davis: An Autobiography. Over 42 years she has written 11 books and one that was published this year! From titles like The Black Family: The Ties That Bind (By Angela Davis and Fania Davis), Women, Culture and Politics (Angela Davis) and Beyond the Frame: Women of Color and Visual Representation (Angela Davis) it is clear that she talks about topics we have surface leveled discussions about in class. She has a career currently at the University of California: Santa Cruz teaching under the title of Distinguished Professor Emerita in the Feminist Studies Department.

Through my research, I’ve come to learn that Ms. Davis still speaks out about her struggles through the political black movement in the 70s and 60s. As her number one movement sparking debate and a sentence of 18 months in jail for being linked to a murder of a jail guard by an associate, George Lester Jackson. Him and a few others were also later a part of The Black Liberation Movement with Davis. Yet, prior to this correspondence she was apart of the Che-Lumumba Club branch in the Communist Party. So this association to the party progressed her charges in the 18 month sentence.

In conclusion, Angela Yvonne Davis was a prominent figure in the change and advancement of women, race, class and culture all over the spectrum.  Beginning in the 16th Street Baptist Church Bombing in Birmingham, to which she lost friends in up to today’s fight for equality. Although she is 72 she still speaks out to the public, writes books and poetry that all talk about the same problems she was addressing 42 years ago to date her first writing. This goes to show that our problems and things that were heavily fought for by many African-Americans, Women and Low/Middle-Class citizens haven’t changed very much. My mother is 46 and in terms of the amount of years Ms. Davis has written proves that many Americans, specifically African-Americans have lived through this fight since we were born. It was sparked before you and I were in this world, it is continuing as we live through it now and it is a chance that it will still be here after you and I perish. The only way to change this is by fighting and voicing our opinion for justice and equal rights just as Angela Davis does still today. 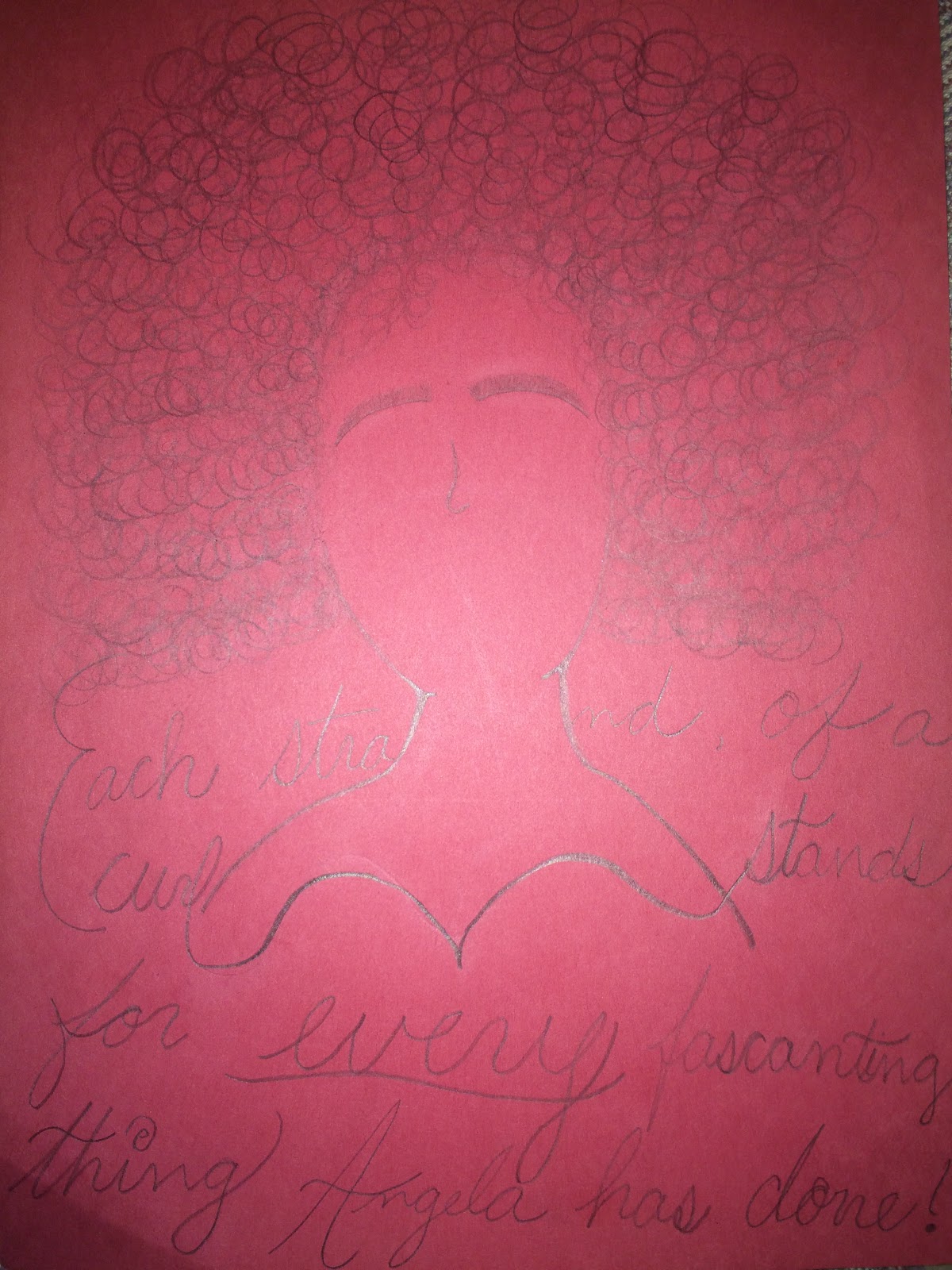 ”Each strand of her curls, stands for every fascinating thing Angela has done!”