Posted by Antonio Reveron in Capstone - Hull - Wed on Friday, May 30, 2014 at 11:03 am
For my capstone, I made a game with my own artwork. In a way, I work with Jovan, but that for his capstone. The characters I animated would make a special appearance in his comic book series. When I was stuck with the game progress, I went to Mr. Miles to seek assistance sine he is the Computer Science teacher. His advice brought me back on track with a game instead of art collection. I created the game using the program, Scratch. I won't lie, it took me a bit to back in touch with Scratch. I haven't used it since freshman year. The artwork was done in Sketchbook Express, which was really handy. Harder to draw out on screen than it is by hand. Still made decent artwork. The problem, however, it was so much animation, I couldn't finish drawing my characters' movements. So I change the game to a simple one, Stick Fighter. A game of the easiest artwork put together. Here's the link. The program runs smooth and instructions are listed in the game. Click on the image below to see a gallery of my work. 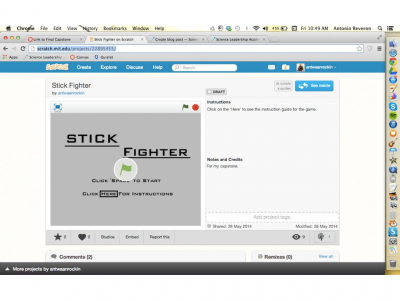