Many people say that a dog is a man’s best friend, but many people say that dogs are vicious wild animals. Pit bulls are great examples of these pets. While some of them can be tough animals, many of them are super sweet, caring, and compassionate dogs. This breed in particular matters to me because I have seen ugly, stereotypical “dangerous” pit bulls in the media, but I know they are not true. I have a pit bull of my own that counteracts these negative things. I have met so many pit bulls who are kind, loving, and loyal. My goal is to spread awareness so everyone can understand how lovely pit bulls really are. It is important for others to see this problem because of the high rates of pit bulls on the streets and in shelters. There are too many stray dogs, which can be dangerous to a normal passer-by. When there are too many dogs in an animal shelter, they are euthanized (or “put down”); then these dogs are killed for absolutely nothing.

Pit bulls, short for American Pit bull Terriers, were originally bred to be bait for bulls. They were later used to fight each other for entertainment. Because of this history, pit bulls can be a little more aggressive towards other dogs, but it does not mean they are vicious. The ASPCA says that “The reality is that dogs of many breeds can be selectively bred or trained to develop aggressive traits… Despite our best efforts, there will always be dogs of various breeds that are simply too dangerous to live safely in society.” This means that only so many efforts can be made to help these pets not be aggressive. While some pit bulls are still more combative, because of their nature, if they were not raised right, they are combative. 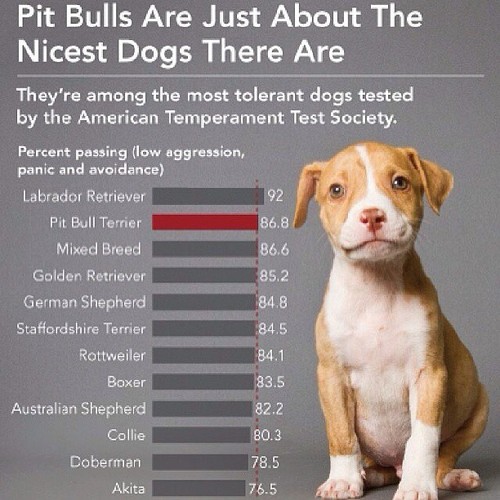 Pit bulls are actually very nice dogs, and according to the American Temperament Test Society, they are the second nicest; just below Labrador Retrievers.

Luckily, many people love their pit bulls, myself included. They are so hard not to love. The ASPCA recognizes October 28th as “Pit Bull Awareness Day”. They understand how important it is to share the good things about pit bulls. They say, “Sharing these stories is important because when people look at a pit bull-type dog or imagine one, different images and ideas come to mind, and those images are often inaccurate and unfair.” Since so many people have a bad image of pit bulls, it is necessary to show them the good ones.

The National Pit bull Awareness Day website is another website that spreads awareness for the love of pit bulls. Their goal is to educate people on how some pit bulls can be tougher, there are so many that are not. Similarly to the ASPCA, they want to change the negative image associated with pit bulls. There are so many websites, like this one, devoted to spreading positive awareness for pit bulls. It shows that there are many people who want to help spread awareness. Sadly, there are also so many people who don’t. 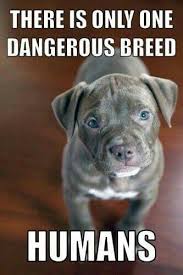 A pit bull puppy with text that expresses that people are the problem.

Even the head of the American Pit Bull Foundation, which provides information about pit bulls, thinks people are the problem, not pit bulls. Sara Enos writes how people do not recognize the huge responsibility of owning such an energetic dog, which results in these dogs being abused, or left in shelters or on the streets. As a pit bull owner, I can say that pit bulls are a big responsibility, but my family adopted him knowing how big of a responsibility he’d be. We manage and we helped my pit bull to become more responsible for himself. For example, if he needs to go to the bathroom, my family and I trained our pit bull to bark when he needs to go. Pit bulls, as well as every other dog breed, need their owners to have patience and be caring when it comes to training them. If their owners do not have those qualities, then their pit bull could have a fiercer personality. My family and I are doing our best to properly train our pit bull in order for him to be an ideal dog. 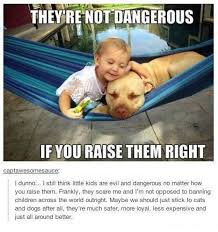 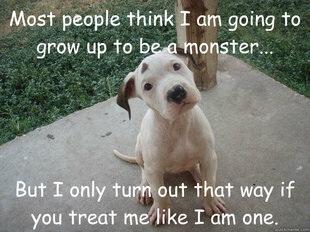 Left: A pit bull and toddler snuggling; which shows how loving these dogs are

Right: Pit bull puppy with text saying how it will only be a monster if he is treated like a monster

In summation, the personality of a pit bull derives from their treatment. If they are not treated well, they will act accordingly. This research proves that the majority of American pit bull terriers are not the violent dogs seen on the news. When raised right, they can be lovable and affectionate. Dogs are a man’s best friend. They just have to be raised that way. 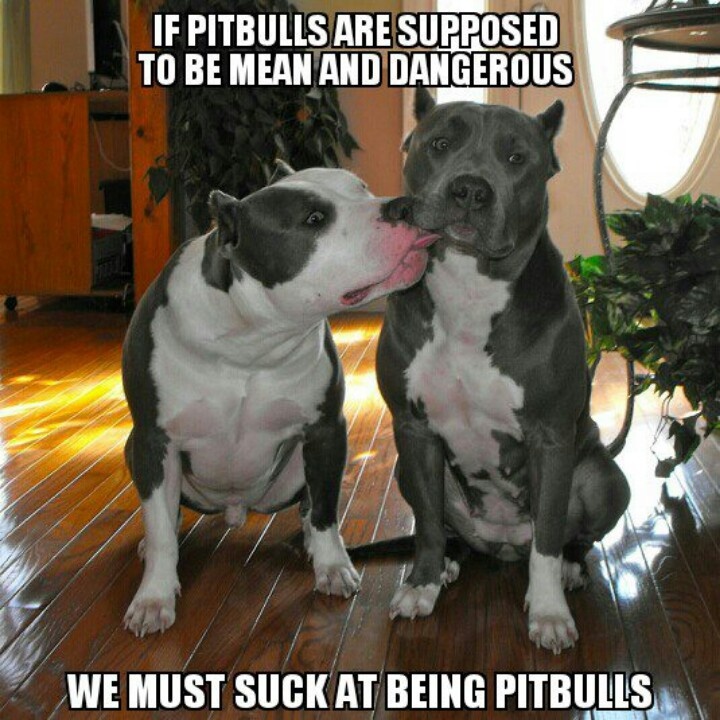 The majority of pit bulls are not the dangerous dogs they are thought to be.

I super agree with your topic. I have a pit bull and it's one of the sweetest dogs I know. Pit bulls are really misjudged and I like how you are pointing this out.

This is really well constructed and a very important topic to be talked about. It was really clever how you explained the negative ways that they're received and debunked them in a way that will change people's minds about pitbulls. I think that for a possible agent of change you could look into volunteering at shelter or organization that is specific to helping pitbulls get adopted and raise awareness about the stereotypes about pitbulls.

I like how descriptive and informative this is. I also enjoy how you used your own pitbull as an exampe. I knew if pitbulls were raised right they wouldn't be vicious, but I didn't know the exact reason of how their "vicious nature" came from. Great work! :P