Hello!  If you remember from blog #1 and by reading the title,  I’m talking about women in the engineering work field and the large difference between the genders.  If you have not read my first blog post, you can view it here.  When I started this project, I researched the reason behind why there aren’t many women in the engineering workfield.  One reason I found was that society puts it into our heads that certain jobs are for a certain gender.  That causes women to feel like jobs in the science work field(which are aimed towards men) aren’t available or offered to them.

“It wasn’t until I was a professional woman mentoring other girls in math and science that I learned that openly liking math and science is unusual for girls,” Marissa Mayer, President and CEO of Yahoo.

For my original research, I made some open ended survey questions but really wanted to see peoples reactions when they answered.  So I asked 14 people my to answer my survey and wrote down their exact words.  Half of the questions were facts about women in the workfield that the people had to respond to with their opinion.  9 of the people surveyed were female and the other 5 were male.  The age range was from 10 to 55 and everyone gave similar answers for the questions/facts.  The first fact I had everyone respond to was, “ 13% of engineers worldwide are women.”  The answers were either something along the lines of “I expected it to be a higher amount” and “that’s not right.”  One person's response was “It’s sort of unfortunate because the sciences overall are not offered to women in a way that they can be involved.”  Another person said “I don’t think women are encouraged in anyway in that direction.”  That goes back to one of the possible reasons for the gender difference I talked about in my first blog post.

What I’m still curious and confused about is if everyone agrees,  then why is their still biased?  Males and Females in my survey thought that the fact that women don’t get equal pay and are nowhere close to the amount of male engineers in the world is unfair.  “As a father of two daughters I know my girls can do as well as any guy.  To deny someone's full opportunity is wrong,”  was one of the answers. 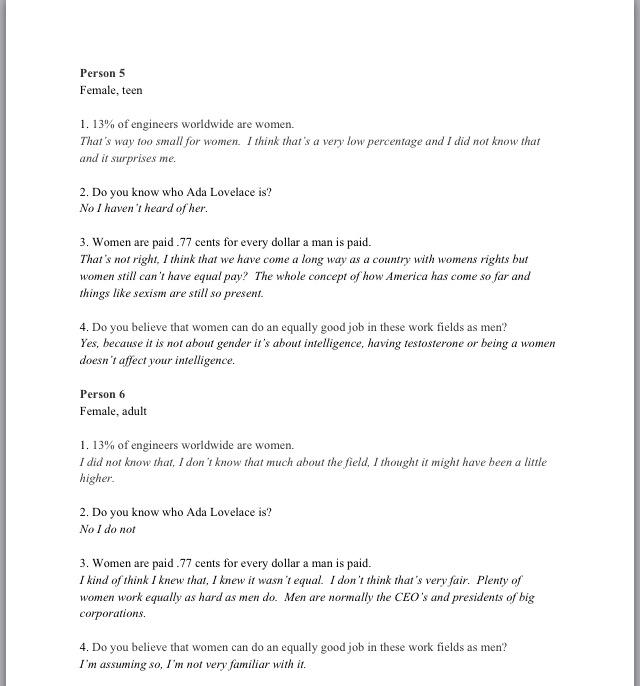 Part of my survey results

I’ve decided for my agent of change piece that I want to make this issue apparent to others, because I feel like the only way to change this problem is for people to know about it.  From my survey results, I saw that many people don’t know who Ada Lovelace is or that 13% of engineers worldwide are women.  Specifically, I’m going to present my project to my advisory.  I plan on making a slideshow that includes the most important details of my project and then seeing what they think about the subject.  I’m also going to find an activity that my class can do after, that allows everyone to be creative.  Be sure to look for my next blog post!