The U.S.’s  most recent recession started in 2007, and ended in 2009. The effects were devastating, leaving many people without jobs. Today, in 2013 the unemployment rate has decreased to 7%, it was at its highest at 10% in October of 2009.  Although more people have jobs, many of the jobs that people are being employed in are low- income and minimum wage jobs. My essay is focused on raising the minimum wage and how it could benefit the working poor and the economy. I feel strongly about this issue because I think its wrong for people to have to work 40 hours per week and barely get paid enough to support themselves or their families.

The federal minimum wage is only $7.25 per hour. Tipped employees like waiters, hotel maids, bartenders, etc. only receive $2.13 per hour. Full time students are paid only 85% of the minimum wage and given fewer hours, so they can attend school. Once they graduate or leave school they must be paid $7.25 per hour. As you can see this amount of money isn’t very high and many Americans are angry because they feel it isn’t enough income to get by in America. Recently many minimum wage employees, specifically fast- food workers, have been protesting against their employers for a higher wage. Because of this, the government has been deciding if it should raise the minimum wage. Many Americans are unaware of what’s happening with the recent minimum wage debate including the different sides of the issue and the basic facts. That is why I think this topic is significant.  There's much to know about minimum wage and people are very unclear about it.

If you ask corporations and conservatives what they think about raising the minimum wage, most would say it’s a “job killer.” This isn’t  a new opinion for these critics. Since FDR tried to raise the minimum wage to 25 cents per hour conservatives have argued it will increase unemployment and destroy the economy. In 1937 The National Association of Manufacturers said raising the minimum wage "constitutes a step in the direction of communism, bolshevism, fascism, and Nazism." But, the truth is the main reason why conservatives argue against an increase in the minimum wage is because the big corporations that pay so little to their workers give a lot money to Republican campaigns. More specifically, conservatives tell the public that minimum wage workers already earn over $47,000 per year. But, if you do the math $7.25/hour for 52 weeks is only $21,112 per year. And many workers make even less than this amount because not all of them work 40 hours per week depending on how much time they have. Conservatives only tell the public these ideas to protect corporations and ultimately themselves. 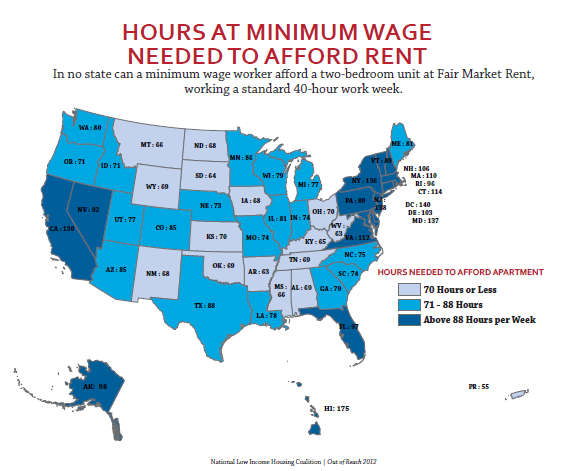 This picture shows the amount of hours needed to afford a two- bedroom apartment. As you can see It takes a lot more than 40 hours.

To be comfortable, a family with two children needs at least a 2 bedroom home. But, at an average market value no minimum wage worker in the United States can afford even a 2 bedroom apartment working 40 hours a week. This is how little these workers are paid and this is why so many people are fighting for a wage increase. And while the employees only earn $7.25 per hour, top executives of companies earn $9.4 billion per year which is $4,517 per hour. To make matters worse $7.25 is even lower than the minimum wage wage was in the 1960’s in terms of inflation. Is this really fair? 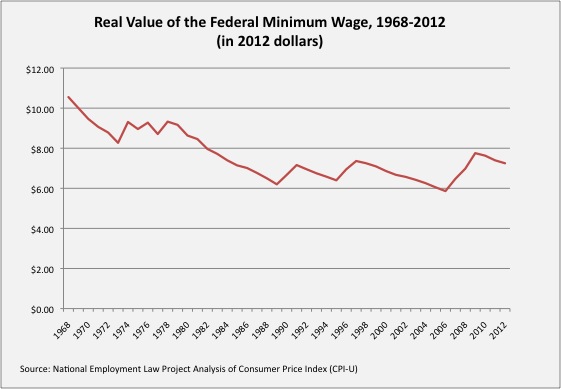 This picture shows how the minimum wage has gone down since the 1960’s in 2012 dollars.

If we want society as a whole to thrive we have to make sure we all have equal opportunities. We shouldn’t give so little to people who work just as hard as their employers. And even if a fast food employee and the executive of the company have much different jobs that doesn’t mean one doesn’t deserve enough to make a living and support their family. After all the research i’ve done so far, I wonder what the life of a minimum wage worker is like and how they get by. I hope to know more about how we got to this point and what is the government going to do about it. Next time I will come with more information to support the increase on minimum wage and show what it can do for the United States of America.

I like your overall blog, I find it very informative. Also, I like how you had mention the average amount of money that minimum wage employees make per hour. I do agree with your point of view, I think they do deserve a higher earning then $7.25 an hour.