Humans are always touted as civilized creatures who transcend the social and ethical limitations of other animals. Quintessentially, we view ourselves as the epitome of current evolution. David Sedaris in Squirrel Seeks Chipmunk begs to differ. In a heartfelt comical way, Sedaris skillfully illustrates the shortcomings of human interaction and often makes, we, the reader think wistfully to ourselves “Did that really just happen?” Sedaris’ writing, which was seemingly intended to degrade and downplay human success and triumph, causes the reader to feel laughter, joy and a sense of precognition which will hopefully save them from the situations chronicled in his masterful piece of art.

The animals depicted in Squirrel Seeks Chipmunk aren’t really animals. The reader is keen to see this very early on in the book. Each animal represents a paradigm of everyday social life in America. We have the gullible sheep, the two-faced trash talking monkey and the self-absorbed condescending warbler. These stereotypes can easily make the reader laugh and look down upon these characters. However they also allow the reader to understand these characters. The questions we, as the reader, may come to ask are “Why is the sheep gullible? “Why does the monkey gossip about other animals?” “What makes the warblers such douchebags?”

The stories force the reader to have either positive or negative thoughts about the animals in the story. Each character is chiseled out with a unique mold that makes them stick out. Each animal has personal ambitions, wants and fears giving the character analysts in the audience plenty of material to tear into millions of little synthetic pieces.

In real life, most people never take the extra steps to understand fictitious characters. Because the characters in the short stories are animals, subconsciously, we are dotting the lines and making the connections which we wouldn’t normally make. The warbler for example didn’t one day just become condescending and arrogant. It was born into a world which nurtured it with that mentality. Experiences and influences in its life caused it to become what it is. In the end, we can come to the conclusion that we really can’t judge a person for something that was out of their control.

Expanding upon the idea that we can understand and sympathize with the animals in Squirrel Seeks Chipmunk, the collection of short stories also makes the reader wonder what animal they are mostly closely related to. When we find the animal we can relate most to we become attached, hoping that everything works out for the animal. However, Sedaris simply won’t allow us this luxury and sometimes gives our characters grimm endings, which not everyone wants to see.

At the same time, we still want to see how everything turns out for the animals because we don’t know which roller coaster ending Sedaris will give us. Though most of the time we can expect the characters flaws to bite them in them in the hiney making them suffer immensely, there are happy endings which puts a smile on the readers face.

To this effect, the entire book is sculpted to have you wonder about how each animals story will end. The reader will want to see some animals succeed in triumph while wanting others to fail miserably. I know that while reading the story of the lazy and selfish bear I wanted him to meet a grimm ending. But the ending I received was a little too sadistic for me bringing to a sympathetic mindset. Sedaris masterfully strums the strings of the human mind making you want to see his characters reach certain resolutions. However, he also makes you question whether or not it was right to wish such harsh fates upon animals when they eventually meet their maker. Characters we may want to die horrible painful deaths because of their flaws, may also be the ones we may eventually come to sympathize with.

I recommend this book to readers who are infatuated with deep complex characters. Readers who aren’t afraid to have metaphorical jabs taken at their species, should definitely pick up this book. Also, readers who are willing to look in between the lines and uncover hidden meanings. This book’s greatest asset which draws in its readers may also be its biggest flaw. For the reader to absorb as much as they can from each short story in Squirrel Seeks Chipmunk, they must be the analytical satirical thinker. Its a double edged sword in that respect.

In spite of this, the several different dynamics rolled into each individual short story that allows the overall product to accumulate into greatness. Each story is chiseled out to incur different emotions and responses from the reader. Its almost as if sedaris expects to receive such a wide variety of responses ranging from fanfare to disdain. Quite simply put, Squirrel Seeks Chipmunk is the kind of book that everyone should pick up at one point in their lives because it does what most books today fail to do. It makes us think critically about who we are and what we do in relation to the stories we read about. This book is a must read. 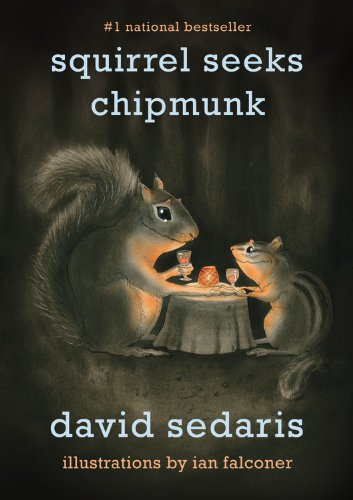 Published by Little, Brown and Company

This review is really insightful. I really enjoyed reading about your thoughts. But I'm left a bit confused with your introduction when you explain that we think humans "transcend the social and ethical limitations of other animals" but that this book shows otherwise. I understand the book a bit differently from your review.

So far from your review, this book is very funny and weird all at once and I would also like to read it.