Posted by Chris Tran in English 1 - Dunn on Thursday, March 22, 2012 at 12:44 pm
This my creative project for the book Macbeth. We have been reading this book and learn how Shakespeare write his play. This creative piece has two parts to it. One is a poem follow by a video that you can watch while reading the poem. This project has help me to learn many things. One is that you can be creative in many ways and also how you should love your work more than everything. 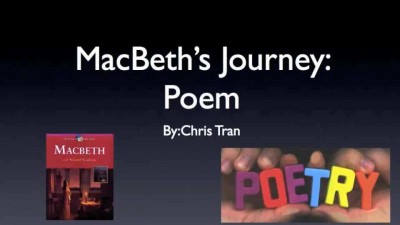 This is Macbeth’s journey…

A journey to his destiny…

A destiny where he could be King….

He believed that when he heard,

He heard the weird sisters predictions,

As he said that his luck change

He became a noble guy to becoming a killer…

A killer who is greedy for power and

After that reflecting stating, “To know my deed

‘twere best not know myself”.

He was safely King,

Oh how coward of him to kill a guy

A guy who is a great king, to take his position from him.

Who is his next victim?

Well the next victim is Banquo

How could he kill his partner?

He had a suspicion that Banquo is a danger to him and states,

“To be thus is nothing, but to be safely thus..”

Then this time he summon murder to do his dirty work

What a coward Macbeth has become from brave man.

Then after that murder of Banquo,

Macbeth has planned to kill Macduff because of his betrayal

He stated, The castle of MacDuff I will surprise…

Has Macbeth gone too far…

Even his own people yes his citizens have turned against him.

Even his own enemy said, “ Some say he’s mad : Others lesser hate him.

This proves that Macbeth has

Gone through a journey of his prophecy.

So he could just die at the end, his future was a total blowout.