For a recap the project that I chose for my PIC is the issue of animal abuse. I chose this topic than any other one because I have a lot of history with understanding animals that were abused and I want to educate the public about the topic. Also, I see animals as living creatures just like humans are living creatures.  Animal abuse is simply when an animal gets harmed, neglected, and/or a does not care for an animal responsibly by a person. In other words, to hurt or to be cruel to an animal would be against the law no matter what.  This the significance of the public being aware of the issue is really serious.

The issue of animal abuse does not only have negative impact on animals but it does a negative effect on humans. When someone abuses an animal they may be an more likely to cause violence. Also, if a child witnesses animal abuse they are at greater risk of becoming abusers themselves! Moving on, if you think that think that animals were only abuse in the one physical way you obviously never heard of the brutal acts of factory farming and Circuses. 99% of the food that come from farms are from factory farms which are focused on getting money, what is easier, spending the least amount of money at the price of the animal's’ life. Also, another example of heartless groups are circuses because the beat, whip, sometimes denied food and water, all to force them to learn their routine. This leads to diseases, damage, injuries and death of the animals. 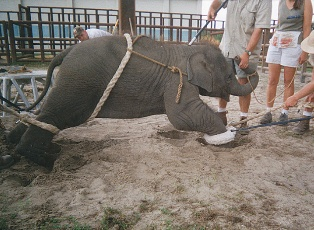 As seen in the image above animals are forced to do tricks that there body is not meant to do.

Now that I have done my research I have some strong personal opinions on how people did on my survey. First of all, I would like to say that I am more disappointed than mad. For example, somebody really had the nerve to say that dog and cock fighting should not be banned because it has been a culture for many years and that would be horrible if it was banned. Also, the average grade for my survey is a failing grade. One thing that I am still wondering about is why my community is so uneducated about animal abuse. In addition, I still need to find more information on what drives a person to abuse an animal. I am thinking of of making a website for my as my Agent of Change part for Blog #3 because I know how to make one and it can easily educate the public. Furthermore, for my website I will be interviewing some employees at the SPCA for a page for my website.