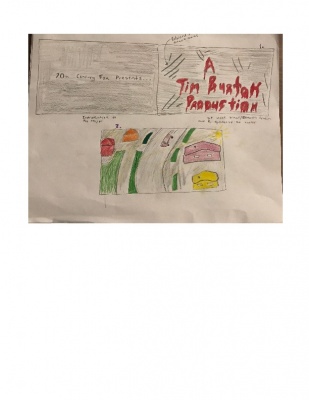 ​Edward Scissorhands as a horror film trailer
CLICK THE PICTURE TO SEE ALL THE SCENE:
#1
Bright colors of neighborhood
-In this picture show highlight the fact that there is a high angle and establishing shot.  Not only that but we definitely make the colors of the neighborhood stand out by giving the neighborhood nice bright and friendly colors. This will give the audience a friendly and welcoming feeling. This technique is similar to what most horror films do which is start off the film as normal and peaceful. Using the same soundtrack and scores that is used in Edward Scissor Hands to start off the trailer.
#2
Still bright colors and shots to show the lady who sells avon products
-In this scene we are showing the nice and peaceful introduction that every horror movie has. In this picture it is a two show of a lady trying to sell Avon products. We use a two shot to show both the Avon lady and the customer. The expression on the customer face is angry and the Avon lady is showing happiness.
#3
Dark lighting and pic of an abandoned house
In this scene we show another establishing shot of an abandoned house. Instead of calm music playing in the background we will replace it with suspenseful and creepy music.
#4
Dark shot of Avon lady in the house
This shot shows the avon lady in the abandoned house using a close up. Her face expressions shows fear and confusion. Replacing the normal and calm music they used in the regular film we will use the same suspenseful and creepy music that we played in the previous scene. Keeping the close ups will keep at the audience attached.
#5
Black screen with heart beats
This particular part in the movie we will just have a black screen. Stopping the suspenseful and creepy music leading to a black screen with heart beats in the background. Adding this to the film will give the film a horror look because this will set up the suspense for the upcoming scene. Keeping it quiet and having the audiences to be on the edge of their seats
#6
Shot of edwards Scissorhands but he is blacked out
This scene will be a really creepy scene to give the audience a scared feeling. Loud screeching sounds will be part of this scene when introducing Edward scissorhands.
#7
Neighborhood looking at edward
This scene will start off with a quick cut. It will show the whole neighborhood surprised and scared to see Edward. Instead of everyone leaving and going into there house because there's a new person in the neighborhood they would be leaving because they are scared.
#8
Kim seeing Edward
This is perfect for a horror film because every trailer has somebody screaming in it; in order to give a quick “fear preview”. I decided the best camera view for this shot was a side one. Because the audience can see more, and can say, “Kim! Turn around!”. Instead of a POV shot (that was used in the film), because that ‘s  a little predictable, and less fearful.
#9
Scene of Edward on top of the kid
We can make this scene look ten times for scarier. By playing some screeching and creepy music in the background and showing Edward on top of Kevin after he saved him from getting hit by a car. Also showing the kid looking really scared. Not only that this will be showing Edward’s face. We will also keep the angle that was used in the film, because it’s the perfect type of angle that portrays Edward trying to hurt Kevin. However, we will alter the context of how their lines were said in this scene. So, instead of Edward trying to actually assist Kevin, we’ll change the context to him being a “deranged sarcastic killer”.
#10
Pitch black #2
Right before Edward is about to slice, it cuts immediately to a pitch black scene with upbeat music,  just to strengthen & speed up the scene.
#11
Edward’s zoom in
The camera zooms in on one of Edward’s scissorhands just to show the audience how sharp his weapon is, and to also introduce the next final scene. The sound would be a slow beat heart, so that it can represent that the audience's heart should be skipping a beat when they see how dangerous his hands are.
#12
Final scene
We show a high shot of Edward’s father (so that way the audience isn’t given any spoilers about who dies in the film, a nood to Infinity War ;) )on the floor dead, after Edward cuts him to see if he was still alive in the original film. But we manipulate to make it seem like Edward killed him.