My name is Tuyet, or Tea. I am writing this blog for my English class. I go to a school called Science Leadership Academy. My assignment is to write a blog about a topic I want to find out more about or something I am passion it about. I will also do outside project about this topic. Its called You In the World. My topic is The Effects of Adoption. Adoption is something that I wanted to talk about because I was adopted from Vietnam and I had a hard time with being adopted.

"Adoption" For some that would means hope. Others that means a life. There are many children and young teens that are without a home and are in adoption programs across the world. This topic hits home for me because I was adopted. I know for me adoption made me feel different. So I wanted to find out how adoption has effected others. Adoption opens a lot of doors for children and teens but adoption can also close doors. Everyone has a story to tell and this blog is to show how adoption can change someone for life.

We are different from others. Most cases children don't get to chose who they live with. Sometimes there are families that take adopted kids in and treat them different from their own blood. There is a question I want to answer before I really get in to adopting and the effects. This question is What's the difference between foster care and adoption. Foster care and adoption are two different things but have a common line between them. There are kids involved in adoption we are given away by our parents where as foster care is where kids are given to a family for a period of time then are given back to their parents. There are some cases where a child would be given to the state and put in foster care and then be put up for adoption because their parents have some reason on why they wouldn't be able to take them out of foster care.

I know what adoption can do to some. This site explains why We sometime don't understand why we are not with our family that were supposed to rise us. I know I am not the only one who has gone through this. When children are adopted they get a roof over their heads and a family that wants to care for them for life. Children know where the have been and understand that they are not blood bond to the people they are with. They also know that even though they are not blood bond to these people they understand that they are loved. Children that are adopted mature very quickly. My best friend in sixth grade went through a really hard time with his family because he felt out of place. He always acted older then his age he wanted a wall between him and his family. Now I can't say I been through the same but there was a point I felt I wasn't wanted. But as I grow I have learned that no matter what petty problems my family loves me and I love them.

I wanted to share my story about the way I handled being adopted. But their are a lot of children who also have stories. So here is their stories and tide bites about what being adopted is like. There has been a long history of adoption in the world. Adoption was not always about building a family or growing a family. In the past kids used to be adopted to become slaves. I found an article abut adoption and it history. History of adoption I believe we can learn a lot on how modern as well as the past had adoption. 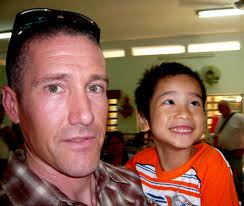 This picture is from an event from an adoption charity called Paul's Kids.

This charity connected me to my family.

I liked that you're talking about adoption but i think more resources would be great. Other than that good blog!

I like your personal angle, but I wonder if you could use more statistics and outside resources. Are you focusing on adoption just in Vietnam? I think you said you were, but you didn't mention that here.