For my senior capstone, I partnered up with two local non-profit animal shelters, PAWS, and Spay & Save, to inform my community about what animal cruelty means and how we can recognize the signs to stop it from happening. Animal abuse can be defined as the cruel, torturous, and neglectful behavior which is forced upon animals. Behavior that is lawfully deemed as "animal abuse" is against the Animal Welfare Act. Despite this clear and ethical law, every day there are thousands of animals being neglected, abused, and forced to fight. Throughout this school year, I have volunteered and attended fundraisers in order to prepare to host my own fundraising event. I planned on hosting a fundraiser to collect supplies to give back to the shelters I worked with. This fundraiser was meant to bring the SLA community together and create a positive change for animals. My event would have included games for all ages, photos of the animals I worked with, art pieces made by my fellow peers & I, and rescue stories from PAWS. My modified capstone consisted of collages and posters to visually demonstrate my gained knowledge about the ways that people can prevent animal cruelty. Despite the impact that COVID-19 has had on me to re-model and re-plan my capstone, I am really happy with my progress and final outcome. I learned about the consistent nourishment, victimhood, and survival that animals face in an animal shelter. I also learned that people who work in animal shelters have long shifts and deal with many laborious and emotionally challenging circumstances when caring for abused animals. These people along with others who intend on adopting animals from shelters, collectively make a difference in our community 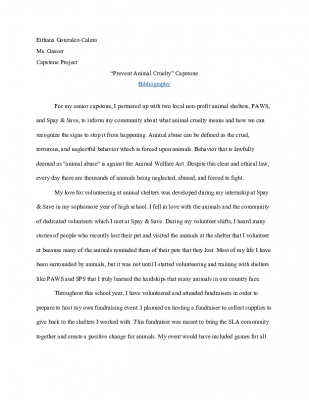 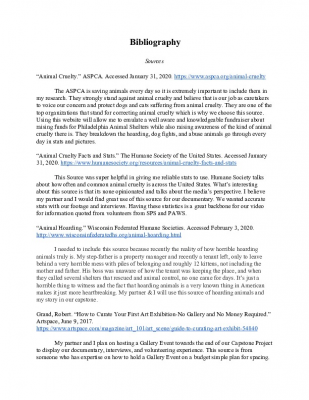