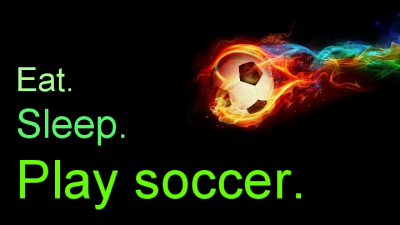 I wanted my slide to represent my passion for soccer. The first decision I made was to have my picture bleed. I found a soccer ball that had a trail to help it bleed off the screen. I also made sure that the picture would make the eye flow to the words as well (since the tail flows). Next, I added my words. I made sure they were big so people could read them and also bright so people’s eyes would be attracted to it. I chose to use three different shades of green because I wanted to add even more emphasis to the words and build them up by not only making them bigger, but also making the colors more vibrant. The green also worked because it was in the tail of the soccer ball flame as well. Then, I made sure to have a bit of empty space so it wouldn't be too crowded.