Posted by Jason Davis on Friday, January 20, 2012 at 9:15 pm
We chose to do this project because the first amendment; dealing with freedom of speech and expression; seemed to be the one with the most flexibility behind it. Generally we had to find a creative way to represent freedom of speech and expression and connect it with some of the c-span footage we gathered.
We used Joe Biden's speech on technology and combined it with a music video for a song mentioning governmental struggles and societal issues. I believe that it was a strong mean of communicating the topic in a creative way because it uses a common american style of music to convey it to certain audiences. The different angles and video transitions allowed us to emphasize different aspects of both the song, cspan footage, and styles of the video.
If I were to do this again, I'd try and use different environments for our music video. Although I liked that we were able to project video footage on his body which showed our creativity, however I think if we used more diverse amounts of footage, then the topic may have been stronger. 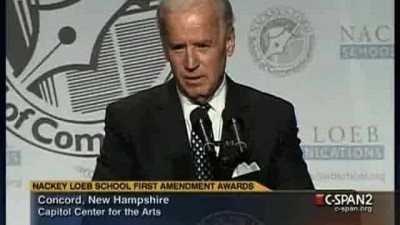