For the film conversion benchmark, we were tasked with remodeling a scene of a movie into a different genre or through the style of a different auteur. The purpose of this being to test our knowledge of cinematic and theatrical elements, and how they play a crucial role in deciding the kind of film that is created. My partner Siani and I focused on the 2012 blockbuster Hunger Games. The film centers on a young woman, Katniss, in postmodern North America, as she participates in an annual event entitled “The Hunger Games” which calls for teenagers to fight to the death until only one survives.

Written as a dystopian novel, and produced as a science fiction and fantasy film, we aimed to take the core aspects of danger and the will to survive and adjusted them into a new setting. With the usage of cinematic and theatrical elements, we adapted the film into a western. The scene we focused on, common titled, “Career Pack chase Katniss” shows the main character Katniss being hunted down by a group of fellow participants in the games. In order to make transform this scene into that of a western, we needed to employ and highlight the various techniques that are commonly found in westerns, techniques that would give the scene the smooth yet intense style of westerns.

Beginning with the cinematic elements, framing is one that played a critical role in capturing feeling. Often in western films, employs close ups to capture the emotion and facial expression of the character as well as to highlight important aspects. Similarly we used many close up shots on our characters faces along with their weapons to show the importance of feeling in the person and of their object, in this case their guns which were very much so apart of them. Long shots, which are used to show the character entire body, usually from a distance, were employed in instances where multiple characters were in the scene so that the audience could see everything that was happening in the scene. Medium shots, which shot from the waist up, were used in many of the scenes to show the characters while also keeping some of the background in view of the reader. Two angles were used in our storyboard. High angles, which are when a character is filmed from above, was implemented during scenes where the Career Pack chased Katniss, to emphasize the danger that she was in. The second being eye level, so that the audience could look at Katniss directly and see the emotion that she is trying to relay. In most western movements, dolly/tracking is used. This is to show the movement in the scene. We used this form of camera movement and included a few slow shots to build up tension as the scene goes along.

In the form of editing, we used two types, eyeline match and cut. A cut edit is when two shots are pieced together to make the illusion of an instantaneous shot. This was evident in scenes of action/confrontation where dialogue, bullets, and the overall action was taken place from different areas of the set. Eyeline match is a technique used to allow the audience to see what the characters are seeing. We used this, during dialogue between the characters to make them reader feel they are in the scene.

When it comes to sound, many westerns are absent of outside music, instead opting for diegetic sound which is sound that originates in the scenes of the movie. In westerns these are often things like the wind, footsteps, bullet sounds, cactus rolling etc. We used diegetic sound to emphasize the sound of the weapons and to catch things that would match the environment. Lastly, rounding out the cinematic features is lighting. In terms of lighting, we aimed to remain true to the time that a western would have taken place. This means natural light in the outside scenes, and dimmer in the indoors.

While cinematic elements are important to a movie’s conception, theatrical elements are just as necessary. First off, one of the most important aspects of a film is the set. This is where the movie takes place and ultimately provides a backing to the film. The particular scene in was taken from the arena, which showed a forest of sorts. Western’s usually take place on the American Frontier, so we made that the new set for our scene.

Like set, costumes also play an important role in distinguishing a film as a western. You will often find things such as cowboy hats, boots, vest, loosely based clothing in warm or earth tones. Instead of the modern clothes as seen in the movie, our characters wore cowboy hats and boots to make it clear they are in a western. In the Hunger Games, weapons such as arrows and knives were the main props utilized throughout the movie. To make it fit the time period, we traded in the arrows for guns, as big portion of westerns are the epic shootout scenes. Acting choices can set the tone of a movie, as it is the characters that the audience is following. We wanted to keep the same tone for the modified clip from the original as it the choices made emphasize the desire of fighting to stay alive. Overall, a lot of things go into creating any specific type of movie. These are the ways in which we were able to transform the Hunger Games into a traditional western movie. 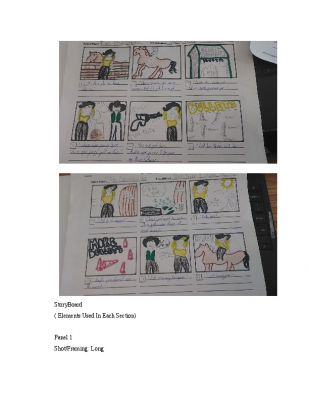