One part of Noah’s memoir that really inspired me to write about my topic was when he spoke about being new to his school. How he had to pick a group to be with and how he felt like he didn’t belong. I really liked the way he explained how he felt and what he went through. I can understand how he felt because I felt a lot of the same things too. That feeling of not belonging somewhere really stuck with me. He talked a lot about being an outsider on multiple occasions which is most likely something that impacted his identity today. In chapter 11: Outsider, he talked about his school experience, how he felt about not belonging, and always having to pick a group even when he didn’t really have any to choose. I really enjoyed his writing style. He made his stories funny and entertaining to read even when some of the moments he talked about were traumatic. He also included a lot of his own culture and identity into his writing. For example, when he wrote in the language his mom yelled at him. It made the reader connect with him. His stories were very descriptive too which I loved, I imagined everything that he wrote about in my head, and so it made me want to make my story as descriptive as possible. Some storytelling techniques I used were visual descriptions, a little bit of humor, and some reflective moments. I didn’t add a lot of humor to my story. I just used it I felt like maybe it didn’t fit right with my story or I didn’t know exactly where to add humor. Even though I tried to add a little bit of humor when I described what I wore to my first day of school because I always thought it was funny. I talked about where I came from, my culture as an immigrant, I talked about myself, and how I had to learn and live in a whole new culture. That explains my culture and identity to an outsider. One of the essential questions of this unit was “ How do our various cultures influence our identities?” in my vignette, I talked about how being influenced by different cultures affected me. It was like stepping into a whole new world and that changed my life completely. Being influenced by American culture as well as my own influenced the way I am now. It taught me so many new things that maybe I wouldn’t have learned if it wasn’t such a big part of my life. 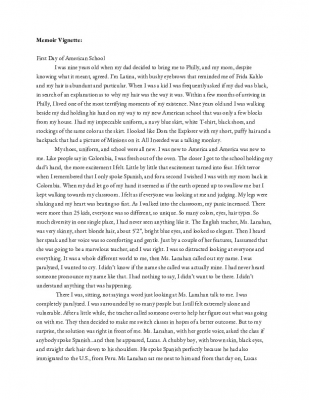 Wow!, I loved it, I loved that saying at the end from your grandmother. I think it's funny but it also fits perfectly to your story.