Posted by Tyanna Pleasant in English 3 - Rami on Friday, March 1, 2013 at 11:27 pm
Shakespeare is a very skillful and interesting poet. He puts all of his plays together in a very unique way. How he chooses his style of words and the way he puts them together is incredible. He gives his audiences different perspectives of each of his works and makes them feel every emotion of the characters. One great example of this is in the play “Hamlet” by William Shakespeare, during the soliloquy made by Ophelia in Scene 3 Act 1 lines 163-175. Ophelia was the romantic interest of Hamlet before he started to act “crazy”. In the ball room of the castle they live in, Hamlet just left the room after truly expressing to Ophelia how he feels about her. Ophelia is left alone and she is saddened by what Hamlet has said to her, and starts to reminisce on how he used to be and how he is now.

Oh, what a noble mind is here o'erthrown!—

Th' expectancy and rose of the fair state,

The glass of fashion and the mould of form,

Is the first few words Ophelia says in her soliloquy after Hamlet has left the room.  She states that he is not the same as before. His mind has been “o’erthrown” (163) meaning turned around, or taken over by something opposite of what he was before. She then starts to give the reader an idea of how Hamlet was before “The courtier’s, soldier’s, scholar’s, eye, tongue, sword, Th' expectancy and rose of the fair state, The glass of fashion and the mould of form,...” (164-167) She is saying that he was, a great role model, so strong, admirable, a gentleman, with a scholar’s wit. She is confused because he was all of these great and noble things and she does not understand what has happened to him. His whole great and romantic personality has went down the drain.

Th' observed of all observers, quite, quite down!

And I, of ladies most deject and wretched,

That sucked the honey of his music vows,

Now see that noble and most sovereign reason

Like sweet bells jangled, out of tune and harsh;

Ophelia is continuing to express her feelings towards Hamlet’s “o’erthrown (163)” mind. “Th' observed of all observers, quite, quite down!

And I, of ladies most deject and wretched,” (166-169) She feels like his new attitude has hit her the hardest because they had a romantic connection with each other. She may feel that he has just let that all go and didn’t think about her at all. “That sucked the honey of his music vows, Now see that noble and most sovereign reason...” (170-171) Shakespeare is also a great man of metaphors and similes and many other figure of speeches. This sentence is a great example of a metaphor. Ophelia is comparing Hamlets new attitude to a music note that has lost its happy tune. She continues this thought by saying “Like sweet bells jangled, out of tune and harsh;” (172) The tune now tune is harsh, instead of how it used to be which was sweet. I found it interesting how Shakespeare chose music notes to compare his attitude to. This shows how unpredictable Shakespeare’s plays are, none of his plays are hackneyed and they are all original.

That unmatched form and feature of blown youth

Blasted with ecstasy. Oh, woe is me,

T' have seen what I have seen, see what I see!

She concludes her thoughts by letting the readers know that he is not the same as he was when growing up, it is all ruined by the madness that is inside of him.” That unmatched form and feature of blown youth, Blasted with ecstasy...” She knows that this is not the Hamlet that was raised by the noble family. He has changed greatly and she does not like it. “Oh, woe is me, T' have seen what I have seen, see what I see!...” She is highly affected by his behavior.

Shakespeare tries to communicate to the audience that she is upset throughout this whole soliloquy because he want to make it as real as possible. Personally, I believe he naturally goes above and beyond in his plays which makes him such a famous and remembered playwright. This soliloquy from Hamlet is a great mixture of Shakespeare’s style. It has emotions 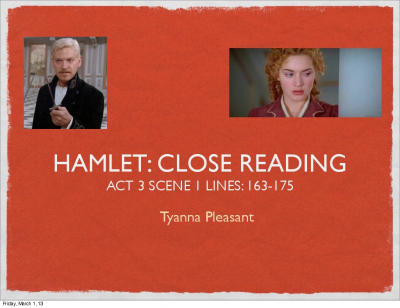