Posted by Antonio Reveron in English 3 - Rami on Friday, March 1, 2013 at 8:37 pm
Act 2, Scene 2, Lines # 606 - 615
I should have fatted all the region kites
With this slave's offal: bloody, bawdy villain!
Remorseless, treacherous, lecherous, kindless villain!
O, vengeance!
Why, what an ass am I! This is most brave,
That I, the son of a dear father murder'd,
Prompted to my revenge by heaven and hell,
Must, like a whore, unpack my heart with words,
And fall a-cursing, like a very drab,
A scullion! Fie upon't! foh!

Analysis
If there is one thing that William Shakespeare does well within plays like Hamlet, it is to give the character a beautiful, dramatic monologue. It is way for readers to understand the character. However, due to our “ascended” language, readers and listeners today would not be able to understand scenes of a character who is alone in scene and speaks out his internal thoughts. The character would be considered to be crazy, expressing such drama and language. With good analyzation of the wording, a reader can understand the scene... as long as the reader dedicates his or her time to analyze the words.

I’m taking Act 2, Scene 2, and lines # 606 - 615 from Hamlet. This is a scene where Hamlet is in his room. He blurts out his feelings of his uncle who is now the King, and who is to be one and only suspect who killed the previous king, his father. To read the book for the first time (or see the movie for the first time), I had no idea what they were saying with the fancy English back in their day. Given time, lines can mean the simplest of things.

Lines such as “I should have fatted all the region kites; With this slave's offal: bloody, bawdy villain! Remorseless, treacherous, lecherous, kindless villain! O, vengeance!” (Lines # 606 - 609) To clarify what kites are, it is not the toy. Kites are birds that eat insects and small mammals.  To clarify another thing, offal is the internal organs of animal being eaten. There is the connection between kites and offals. Hamlet imagines the pain he wants to give his uncle. He describes his uncle as a villain plus a few other things, and given the situation, he’s right. His uncle committed regicide. This is treachery. His uncle immediately married his mother after the king’s death. This lecherous. The way he pulled off the crime by pouring poison in his ear, and leaving him. This is remorseless and kindless. It is amazing how one word in a line can mean so much. I don’t blame Hamlet for seeking vengeance. I would have the same feeling. No one gets away with regicide, not even if the victim is family.

This is probably a set of lines that could be understandable, but may still have confusion. “Why, what an ass am I! This is most brave, That I, the son of a dear father murder'd, Prompted to my revenge by heaven and hell,” (Lines # 610 - 612) Hamlet notices himself acting wildly about this, and he is embarrassed (even though no one is around him). Yet, he recognizes he is better than this. He is after all the son of the previous king, he is a prince (or lord). He should be less unstable about this, but he can’t because the one person he looked up to is dead, his mother married the traitorous uncle, so he can’t really look up to her now. He is a lone wolf. Even so, he feels his pride rise once he realize he is destined to avenge his father death, and if no one can help, he must do it himself. That’s what makes it difficult for him. Once again, words that mean so much more than they let on.

These lines required more time for analysis. “Must, like a whore, unpack my heart with words, And fall a-cursing, like a very drab, A scullion! Fie upon't! foh!” (Lines # 613 - 615) Now, Hamlet self-pities himself by saying he shouting outbursts of his rage and that he isn’t doing anything that is benefiting him. To clarify, a scullion is a kitchen servant who doesn’t need skill to his or her job done. He’s saying he can’t do much with screaming and fooling around. He knows something must be done, what he was doing a few moments ago isn’t going to get him anywhere. It normally wouldn’t for anyone in that matter.

There we have it. One section of a scene analyzed and explained. If readers/writers are given the time, they can understand Shakespeare. More specifically, the monologues the character such as Hamlet express. It's what makes the monologues unique. Their ability to tell more than what we see. 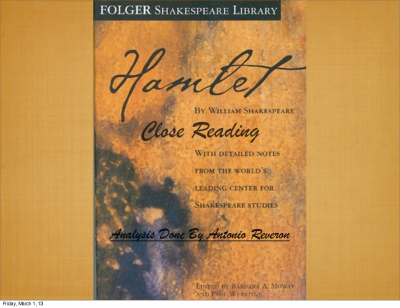