For my yearlong Capstone project, I primarily wanted to focus on my interests in terms of my future, in college and beyond. Considering my intention to go to film school, I created a full, feature-length script for a film — an 89 page script to be exact. I also elected to create a short, proof-of-concept film piece featuring some of the base ideas of the film. I worked on the script for a few months, editing and revising both as I went and after finishing, and created the final short film in the final month and a half before the due date of the Capstone. I was able to create most of what I wanted to put together, however not everything can be perfect. This was quite a learning experience in terms of preparation and planning. There were several things I wanted to put in the short film that I wasn’t able to attain, because I couldn’t get the necessary permissions. If I had given myself more time to set those things up, maybe I would have. I also learned a wide variety of things about writing scripts, such as many things about formatting and conventions that I had never even thought of before. Putting word to paper to video is definitely some experience that I feel will be useful moving forwards. All in all, my final product expresses the work I put in, as well as serving as a strong learning experience for what I wanted to learn about.

Warren lays on the floor beside his bed, still gripping the gun tightly. He's leaning back against his nightstand, where his clock still sits. The time reads Nov. 9th, 3:23 A.M.

He stares down at the gun, turning it over in his hands, taking in every inch of it. Every so often, he flips the safety off and on again. He turns it until the barrel is facing towards him while holding it sideways. Slowly, he turns it upright and looks straight down the barrel, almost as if he's examining it. He starts repeatedly flipping the safety off and on over and over.

Abruptly he turns the gun away from himself, extends both his arms fully, and points the gun straight towards the walls. He takes aim, flips the safety off, and breaths in heavily. He holds his breath for a long while, before letting out one large breath, flipping the safety back on, and dropping his hands down to his legs.

He looks up towards the ceiling for a short while, before he drops his head and stares directly at the wall in front of him, returning to flipping the safety switch repeatedly. Slowly, all other noise drowns out and the sound of the safety switching grows louder and more distinct. After a time, the safety flips in time with the loud click. 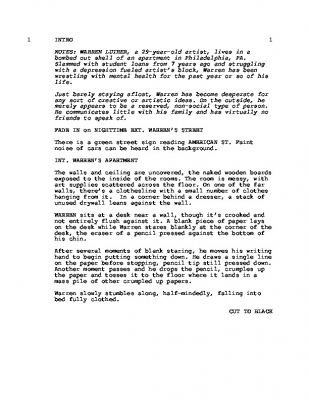 This books is an introduction and guide to the basics of the more technical aspects of filmmaking. While it may be a bit dated in terms of technology, it still provides a good understanding into what the physical portions of the movie making process, such as camera placement, lighting, camera movements, etc. This source is useful to me because I gives me a resource to reference when I am actually doing the filming portion of my project, which will have to come about at some point or another. There are many things about actually shooting a film that I have yet to learn or even know about, and this book gives me a window into the things that I’m missing, the skills that will be useful to develop, etc.

This books provides insight into theory behind film itself, taking specific look into film and movies as a medium, rather than just simply a look into writing or the creation of story. It discusses storytelling from the particular angle of movie and filmmaking, giving ideas about how visual aspects of film related and integrate into how stories are told by its creators and understood by its viewers. It gives me new perspective into what I should be considering when designing my scenes, not only for the process of writing the script, but also when thinking about how I should design the trailer that I plan on producing.

I acquired this book from the library while trying to do research, and found it to have a lot of information about writing screenplays, down to the most basic level of methodology and constructive criticism. After reading it, there are several things that I took from this book into consideration while writing, such as certain aspects of designing character. This is especially helpful to me, considering the script I’m writing is a very single-character heavy story, in which every inner workings of the character’s mind is meant to be explored. Reading the book gave me insight into ways that I’ve been designing my characters right, and ways I’ve been designing them wrong. With that knowledge, I can better my process and create a more dynamic and interesting protagonist and story.

Found online while searching with Google Scholar, Detours and Lost Highways: A Map of Neo-Noir is a book examining and breaking down the contemporary sub-genre of film known as Neo-Noir, which is a stylistic offshoot of the classic sub-genre Film Noir. The reason this source has value to me is because the film that I am designing the script for is in many ways, inspired by both of those sub-genres. Understanding what makes these genres themselves is useful to me because it allows me think about how to create scenes, characters, and interactions in a way that facilitates design choices that fit with the Noir style.

Which Lie Did I Tell? is a book that provides a large amount of insight into the screenwriting side of creating a film, using real examples from real films and real screenwriters in order to express its ideas. I gained several new understandings from the book, all of which have at least some value to me. Specifically, it’s helped me understand how different the process can be from person to person, as well as how similar it can be. Meaning, many people go about writing scripts, or really anything at all, in very different ways from one another, but the core concepts on creating a story are virtually always there in some shape or another. From this, it helps me understand that while the way I create a story should be influenced by others, the writing process will always be my own.

This source is an online internet archive containing a wide ranging amount of film scripts and screenplays. I’ve cross referenced multiple movies that I’ve seen and know fairly well with the scripts to ensure that they are most entirely accurate, which they are. As such, I feel this source is reliable. The reason this source is of value to me is because it features many different movie scripts. I find that it’s valuable to me to look at real scripts and screenplays of real movies, since it would be difficult to write a script when I’m not sure exactly what a script should look like. It also allows me to look at scripts from movies that I like or take inspiration from, which is helpful for looking at what works when used in a script, what certain things need to work, and what just generally doesn’t work.

This source is something that I used for part of the creation of the main character themselves. My script follows a character with multiple different mental health issues, the primary one being insomnia, from which most of the other issues arise. When writing this script, I don’t want to create a misinformative piece in terms of the issues the character faces. I chose to do research into the problem, to have a better understanding it when writing about it. This way, not only does the piece not spread misinformation, it could potentially spread real information, that could help other people better understand issues like insomnia.

This source is a website article featuring several successful screenwriters providing insight into their experiences in writing scripts, as well as some tips on how to go about writing a script. Some of these tips are especially helpful to a beginner or novice scriptwriter, such as myself. The source provides me with a real look into minds and ideas of different writers that have written popular or successful films, which can come in handy when trying to figure out the best way to go about the process. One limitation, of course, is the fact that this is a very limited glance in, considering how many scriptwriters there are, and how few are featured in this article.

Martin Scorsese’s 1976 Taxi Driver was one of my key pieces of inspiration, going into this Capstone. My initial idea behind the script was with the goal in mind of creating a modern, Philadelphia take on Taxi Driver. The story itself, main plot of the script, and the characters are all meant to be part of their own narrative — but the mood, vibe, and feeling are all meant to in some ways emulate that of Taxi Driver. The movie was a heavy influence behind the script, and inspired many parts of it. As such, Taxi Driver is one of my primary sources in creating my Capstone.

This book, like the previous one, provides me with some insight into the more physical aspects into filming, only with a more specific focus on Andreĭ Tarkovskiĭ, an acclaimed Russian filmmaker. It gives me a chance to understand a particular director and how he chooses to go about painting images and expressing details of a story through frames and shots in a film. This is useful for me to get an understanding of how filmmakers go about going from a script to a detailed piece of moving, visual art. It’s valuable information for taking parts of my script and converting it into a trailer that expresses the core ideas of what I’d like my film to be.