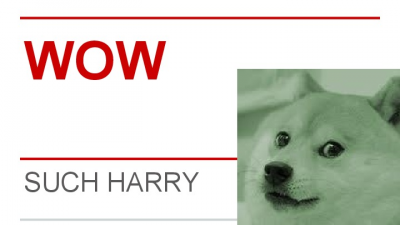 (The following is in reference to only the first slide.)
This slide-project was assigned for tech, to help us better understand simplistic design.
I made this slide the way I did because it looks nice- namely, it draws your eyes to the word “WOW” through contrast and and size. I included the word “WOW” and a zoomed in picture of that Shiba Inu because it represents the unhealthy amount of time I spend on the internet. I used the color pallet of red, grey, and white because of how well they contrast. I kept it to three words and one photo so that during presentation, the slide would not visually drown out my voice. I tried to make it so that each set of word took up two thirds of a row of a slide, and so that the picture took up the same, following the rule of thirds.
I had the font as Comic Sans because it was a reference to the internet phenomenon known as "Doge," but decided that Comic Cans wasn't minimalist enough and that I should to change it to Arial. 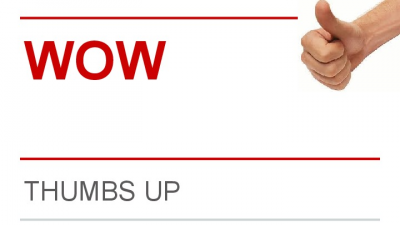 (The following is in reference to both slides.)
Through this slide-project, I learned the desired features of a slide. I knew already what an "appealing one" looked like, but having it spelled out so plainly by Presentation Zen was useful.
For the second draft of my slide, I changed the bottom text to "thumbs up" and I changed the location and size of my picture to higher and smaller (respectively), and I changed it from a doge picture to a free thumbs up picture. This was all in the interest of making the doge less annoyingly prominent.
I was unaware that "Ms. Hull set me up for failure."
During classroom discussion, I learned how easy it was to pick on even the best of student art. In a topic you are well educated in, any error becomes glaring.

I wonder why you picked the dog? The dog looks cool.