Online Predators. Most people have heard the term, but what, or really who, are they? In a nutshell Online Predators are people who commit child sexual abuse that begins or takes place on the Internet. “Predators have easy and anonymous access to children online where they can conceal their identity and roam without limit. Often, we have an image of sexual predators lurking around school playgrounds or hiding behind bushes scoping out their potential victims, but the reality is that today’s sexual predators search for victims while hiding behind a computer screen, taking advantage of the anonymity the Internet offers.” According to Enough is Enough. Children are targeted, but a large amount of Teens are affected as well. “The majority of victims of Internet-initiated sex crimes were between 13 to 15 years old; 75% were girls and 25% were boys.” Was recorded by the JOURNAL OF ADOLESCENT HEALTH. Here is a graph that shows the most popular ways these said predators can reach the children. 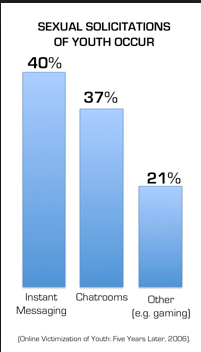 This needs to be brought up and have more awareness for many reasons. One; most children are not educated or not educated enough about this topic. If we could teach kids how to be safe Online, there would be a lot less of this crime going on. Two; some parents are not educated enough in this field. If more parents knew the signs of a predator, then more of these instances can be avoided or cut off before it goes out of control. And finally; our society is mostly based off of modern technology. This allows Predators to stalk in the depthness that is the internet and can get away scott-free. If we educate and teach more individuals about this issue, more events like these can be stopped. There has been cases where some police units are trying to bring up awareness, however it is not brought up enough on a global scale. A picture of the Police's Campaign Poster is here: 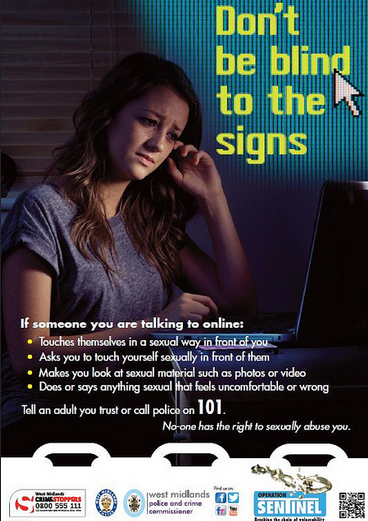 So what are some of the signs of an Online Predator? According to the Washington Police there are several tricks Online Predators use including, but not limiting to; chatting privately, flattery, intimidation, asking for personal information, and sympathy. The main way predators lure in their victims is by ‘grooming’. “Grooming is how online predators manipulate children into meeting in real life with their sole goal of having sex with them. Predators will spend weeks, months, and/or possibly years "grooming" their victims before asking them to meet in real life.”

So in conclusion people who commit child sexual abuse that begins or takes place on the Internet are known as Online Predators. They ‘groom’ children into thinking they are trustworthy and take advantage of that to engage in sexual offenses. There are many signs of having contact with a predator such as chatting privately, flattery, intimidation, asking for personal information, and sympathy.

Very interesting topic, Zoe, and an important one for raising awareness. I'll be curious to see where you take this research and action!

Wow Zoe, you did an amazing job talking about this kind of issue that is going on currently. I like to the title you used, it is very useful especially for this topic. I also like the graph you posted, and the visual which gives information in case help is needed, and helps people be aware of these sorts of things. You did an amazing job!!