Posted by James Thomas in Capstone · Hernandez/Hull · Wed on Tuesday, May 1, 2018 at 9:24 am
​ For my Capstone, I decided to write chapter book based on characters that I created in my younger days. These include characters like Speeder, a superhero with the abilities of superspeed, and Chrono, a time traveling agent of T.E.M.P.E.S.T. Throughout the book, these two team up and traverse through multiple alternate dimensions, looking for a villain bent on attaining ultimate power.
Honestly, writing the story was not the hardest part. I outlined what would happen in each  chapter, which made writing out entire chapters almost a breeze. I did look through books by other authors to observe their strategies and implement them into my own work. The editing process, however, took way longer than I anticipated. It took me three months to write out the entire book, yet it took almost twice as much for it to be edited. I went to Lit Lab in order to get it peer edited twice every week so the book had as little mistakes and inconsistencies as possible. After finishing the edits I needed to make, I had my outside mentor read it over, filtering out mistakes even further.
Overall, I learned that writing a big piece like this requires a decent amount of forethought and planning. This way, one won’t have too many cases of writer’s block. I also learned that editing takes a lot longer than I thought. Hence, I’ll make sure that I leave enough time to edit whatever I write in the future. 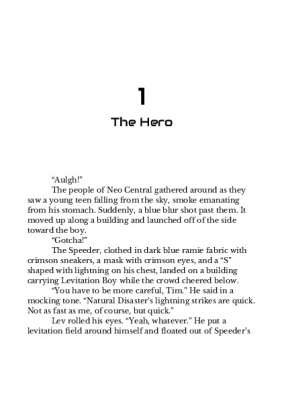 I also read Charlie and the Chocolate Factory when I was in fifth grade. However, I am using it now for a completely different reason from Bridge to Terabithia. While that source helped me with flushing out the background, Charlie and the Chocolate Factory helped me flush out the characters. It had about seven main characters throughout the story, all with different personalities, and kept their dialogue consistent. I used Dahl’s strategy in my own book by writing a short bio for each of the main or recurring characters and writing around those bios, ensuring the consistency of each character.

My book mainly takes in an alternate version of Philadelphia, named Neo Central. The characters also travel through multiple other versions of Philly, including the one in real life Pennsylvania. So I figured that it would be cool to have some landmarks or popular places that Philadelphians could recognize. These places would also change as the characters travel through dimensions. So I looked on online for some sources that describe popular and frequent spots in Philly. However, I could find no such source. So I decided to research it myself. Using Google Maps, I looked at the part of Philly where this book takes place and found exactly what I was looking for.

Sabotaged is the first book in the Missing Series that I read. Ever since, I was intrigued by the books until the final one came out. I was hooked on these books because after every chapter, there was a cliffhanger, leaving me with a sense of emptiness. I wanted to know what happened next, so I kept on reading. I took this strategy used by the author and implemented it into my own book. At the end of each chapter, I am adding a cliffhanger that leads into the next chapter. This will keep readers invested and coming back to the book.

The hi-tech medieval dimension in the book has several characters that I wanted to speak in a language similar to Shakespearean plays. So I needed to research Middle English in order to learn about that language and be able to write dialogue with it. That is when I found out about Josh. He has researched Middle English for at least 8 years and has shared his findings with the world. He created a website to showcase his knowledge and teach others how to use Middle English correctly and efficiently. Therefore, I used his site to help me write dialogue for Sir Phoenix and random civilians in the book.

I read The Road in 12th grade. I saw it as a very insightful source, as it showed me that fluff does not have a place in a book. Cormac McCarthy wrote The Road so that every word was important to the story and it got straight to the point, not getting sidetracked by anything. I wanted to use this strategy in my book, as I dislike when a book as useless fluff that has no meaning to the entirety of the plot. Therefore, I made sure that every part, every chapter, every word to the story pertains to the larger plot.

I first read Palacio’s Wonder in seventh grade. I was interested by the author’s use of different fonts and spacing for each character’s narration. It described the characters without necessarily needing to describe the characters. Since I found it so interesting, I wanted to include this strategy in my book. I did not want to give each and every character a different font because I have a lot of characters in my book and it would get very confusing. As there are multiple points where computers or any other technology speak to the heroes, I decided that the tech should have a different font from the humans. This would give the tech a robotic voice and describe the voice of the tech without the voice necessarily being described with words.

I first read the Bridge of Terabithia back when I was in fifth grade. It was a lovely book with a whole lot of imaginative imagery in it, describing practically of detail of the background and scenery. Using words that presented more of an impact to the reader, it instilled in me a sense of wonderment while I visualed the scenes in the book. This strategy used by Paterson is what I implemented in my book. In regards to describing the background and action scenes, I used words that will resonate with readers and provide vivid descriptions in their minds.

This is the site I will use to print my book. It allows me to submit a pdf of the text I want printed and create a cover. Since I already received the cover art from my cousin, I can submit that art to the site and use it as the cover for my book. After approving both the pdf and the entire cover, I can then move on to the printing phase. It cost $4.47 to print a book, which is not too costly compared to other publishing sites. After paying, they will print it within 2 to 3 business days.

Including myself, my book contains characters that are counterparts of my real life friends and family. This meant that if I got their characteristics wrong or portrayed them in a way that they did not like, they would be very annoyed to say the least. So I had to talk with them and figure exactly what they would say in certain situations. This included constant questioning of my brother, Timothy Thomas, as he and the different versions of him make recurring appearances in the book. The questioning did not end with speech patterns, however. I wanted every detail to be as accurate as possible. So I asked them about their height, weight, and other aspects about themselves, making the book as realistic as possible.

When I was first starting this capstone, I wanted some strategies on writing a full book, not just two page essays. I just went on google and searched “How to write a book” and this WikiHow article showed up. It described six strategies the helped me a lot in the long run. The first was buy a notebook to put ideas in. I did not technically do that but I did start a new google doc to do the same thing. The second strategy was to think of ideas for stories. I had no idea at first what I wanted to write about until it clicked when I was writing out ideas. The third strategy was to create an outline, which helped me to write each chapter with detail. The fourth one was writing down every character with meaning to the plot. The fifth was write the outline and the sixth was “edit mercilessly,” which was the greatest strategy of all. The first draft of a book is rarely the one an author settles on, which was very true for me. So in the long run, WikiHow helped me begin writing my book and encouraged me to keep editing where it was necessary.