For me, the capstone process was one filled with great highs and lows. The idea for my capstone towards the end of junior year. I wanted to take the science fiction short story that I worked on during junior year, and expand on it. I originally intended on it being a full length novel, but it did not end up as such. High school, working, and the college process caused me to spend a lot of time away from my capstone. Soon I realized I would not have enough time to write a full length novel of quality, so I changed my plan and turned it into a shortened novel. With my revised idea, I spent time writing, editing, and revising my story. Using the information given from my mentor Stephanie Sessa as well as the input of friends and family I was able to produce my final product. One that I am very proud of. The book titled, Control, is a combination of science fiction and dystopian fiction that take issues of the modern world and puts them a new and different perspective. Throughout my process, the most important lesson I learned was that in order for product to be as best as it can be, there must be time put into it. Had I been given the chance to do this process again, I would allow myself more time to work on the novel so that it could be my full and complete vision. Despite this, I delivered a solid final product.

Lily was the optimistic one. The youngest, barely 18, she always tried to lift the mood of sorrow and anger. She tried to play games, tell stories, and such although we weren’t the cheeriest bunch up to have fun. She often spoke of her big loving family. How they spend every christmas at her grandparents cabin in the Poconos and roast marshmallows over the fire. She seemed to stay in a state of disbelief, and tried her best to remain in the past where everything was good. I guess this was her way of coping. Sit in a state of false bliss to avoid coming to terms with the actual problems. She would tell us about her life plans, and what she would do with her family once this entire “simulation” as she called it was over. She had her entire life planned. None of us had the courage to tell the poor girl that she’d probably never see them again. That she had come to the point of no return and would be stuck here forever. We let her live in a whatever bliss she created for herself to manage the pain.

Next was Alice. Quiet girl, soft spoken, around my age. Like me she had been taken on her way home from work, accept according to her accounts that had been very rough on her. She said once a main grabbed her she managed to kick his groin and run down the block, only to have three men tackle her to the ground. She was punched, gagged, and tied in down in the van. She was thrown in the cold room with the rest of us, with a bloody face and they didn’t seem to interesting her distressed appearance. I could tell she was still slightly traumatized from the experience, and was scared of anything else happening. She adopted the motto of “laying low” and never challenged the authority. After seeing a small portion of what they were capable off, she didn’t want to put herself through anymore unnecessary pain.

In most ways she was an ideal prisoner. Always did what she’s told, kept complaints to herself, and expressed no desire to leave. Accepting this as her fate, she had the mindset of listening and doing whatever it took to make it through both this day and the next. It was hard to get through her tough exterior, making it hard for any of us to get close to her. However, we would get glimpses at the girl beneath the exterior.

Sometimes, she would tell a story here and there about her family or life in general and she seemed more than a robot programed to do everything she was told, but just as the vulnerable and human side of her came out it would quickly close back up.

Lastly, there was Diamond. The exact opposite of Alice, Diamond was a spitfire, She wasn’t shy to speak her feelings of disdain for the government and the program. Something that nearly got her ruffed up by The General and a few of the guards on more than one occasion. That’s the nickname we gave to Joe. Every she expressed to us her strong desire to figure a way out, telling us that it would take the cooperation of all four of us to make it happen. It was her fierce personality and determination to never give up that brought me closer to her than the other two.

One night after dinner, she told us her story. She was a single mother, lived with her mother, and taking classes at Community College while working a full time job at the supermarket. One night she was late picking up her sun from daycare, and as she stepped out of her car was hit on the head and fell unconscious. The thing that plagued her mind most often was of the wellness of her family. She wanted to know that they were okay, and no one could give her the assurance that they indeed were. Despite her strong front, I could see the pain and sorrow within her eyes. Every so often she would utter her son’s name and her eyes would get watery. Unlike the rest of us girls, she was not just living for herself, but also for her child. The one she may not ever see again.

They tested our ovulation every other day trying to pick the perfect day. Diamond was the first one to experience the removal of her eggs. She was gone for about an hour and came back in a sea of rage and disgust feeling as though something had been stolen from her. She cursed at the gards and even flipped one of the beds. Eventually I was able to calm her down, but I had yet to experience the feeling that something had been stolen from me. But I would soon experience that very thing.

I remember slowing walked down the dimly lit hallway looking towards the big red doors. I took small steps, wanting to take up as much time as I could before I entered the room. I didn’t fully know what to expect nor did I want to find out. I walked into a what looked to be your average looking hospital room. White, clean, and abnormally silent. There was a man sitting at the desk, who if you weren’t paying attention could walk right past him. He had me completely undress and lay on an operating table. Not much interested in conversation, he was there to do a job and I was there to be used.

A man named Wayne introduced himself as the doctor. He said no more words to me before the procedure, instead just putting me to sleep. When I woke up, he was cleaning up and simply said, “You can go.” I sat up, confused at what just happened. Physically I looked the same, but my body felt as though it didn’t belong to me. Something was off, and I don’t think I ever felt the same after the procedure.

Walking back to the room, the emotions begin to fill my body. I’m not sure if I was more angered at my bodily possessions between forced out of me or the fact that those doing it had so little respect for what I was giving to them. We were giving them the “future of America” and they had not the decency to say thank you for our great contribution.

It was that night as I laid in bed staring at the ceiling that I decided I was done. Previously I tried to convince myself to go along with the program and to keep myself safe in hopes that one day I’d be able to go home, however that feeling was long gone.

I was no longer willing to actually give myself to those who were so unappreciative of it. I knew in that moment when he rudely told me to leave, that this was the end. I knew I had to escape. The next morning, right before The General, I told the girls we had something very important to discuss. When we got back to the room after retrieving breakfast, I expressed my strong feelings of disgust for the program and my desire to escape. Letting them know that if the four of us band together, we could possibly find a way out. Without even asking if there was a definite plan, they all agreed to participate. Even Alice who several times in the past spoke against escaping, arguing that dealing with our fate would be a better option. With the four of us in, we started to the planning. We realized early on that there would be a series of obstacles in our path. The first being The General. 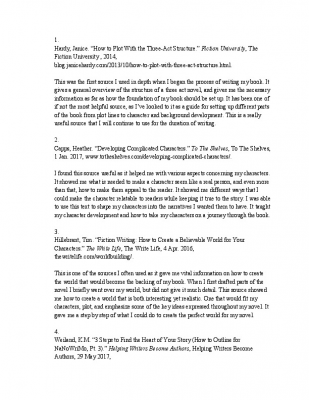 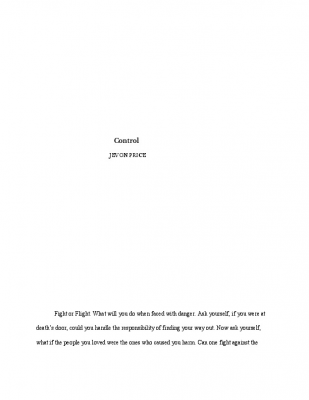