In my previous Blog Post, I introduced my topic about labeling women and the different issues women face with the issues at hand. This type of issue occurs in a lot of places, and I decided to mainly zoom in on places like school. I have learned that the labels attached to women do not have to be sexual to be offensive. Some new information I have found since my last post was that there was a commercial titled ¨ Labels Against Women¨ showing different kinds of titles given to a man vs a woman in the business career. It was backing up the point I made in my recent blog post about how men doing a certain thing and being praised for it. On the other hand, when the women would do the same exact thing as the men did, they were only shamed for it.

Another thing that had seemed to catch my attention, was a comic like article about sexual labels. As I said before, not all labels given have to be sexual to be offensive, but in this case this comic showed a very detailed example of some. It was proving the fact wrong that any sexual relationship has to be between a man and a women in order for it to count as sex.

Two images shown above: Early on the young lady was talking about having a sexual relationship with another female, and it was questioned, because ¨it does not count" unless it is between a woman and a man.

For my original research, I decided to send out a survey to a good amount of females in the school. Not every female took it, but based off the information I got some varied results. For the survey , I asked whether the females taking it have ever been labeled, and I gave them some very popular labels to choose from, if so. Not only did I want to know what labels they received, but I also wanted to know what effect it had on them. ( In all due respect, I kept results anonymous) 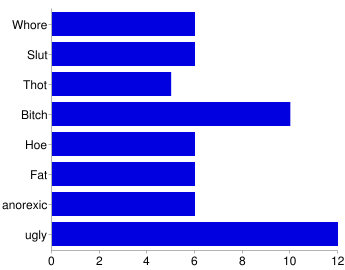 Image shown above: The bar graph shown aboves shows that most of the women who have taken the survey have been called ugly

Image above:  The image above shows that more than 50% of the females taking the survey have labeled someone

Image above: This image showed that more than 50% were willing to help the issue of women being labeled

This information helped inform me on my issue, because the data showed that a lot of the females learned to just push the rude comments to the side, while others took great offense to it. The data also proved the point that most of the women who took the survey were mainly called the labels that were not sexual. Personally, the results shocked me, because I didn't know the varied ways certain individuals took the name calling. For my agent of change I am planning on making T- shirts with certain labels and there real definitions on them. That way females can wear them around the school and maybe even outside if lucky enough.

I like the image of the comic you used. The graph shows the results you received and it was very useful. You're blog was done very nice and I enjoyed reading it! I look forward to helping you with your Agent of Change and making people aware of this better than ever!

Great post! I love this project the video is so impowering and that comic was so great. NICE FINDS! But good job gathering your research. Looking forward to the rest of this project.