Reflection: This project was very difficult for me at first because I had no idea what I wanted to write about. I never really paid attention to what other people had to say about language so it was interesting to read about other people’s opinions. My strengths with this project were writing my own experiences because it was so easy to talk about. My weaknesses were trying to stay on topic since it had to be almost a thousand words I thought I was going to get off topic.

Paper:
In school you are required to take a second language for at least two years, but why? Why can’t I just know English? What if I don’t want to learn another language? We are all taught Standard English and that is the right way to speak so why would they teach us something different? The school district thinks it will benefit us in our future but what if we don’t think it will? Then why do we need to know two languages?

The day has come the day I get my first quarter report card for sophomore year. I walk into the tiny room with my advisers and my mother. I look down at my narratives. I had an amazing report card but unfortunately Spanish is the first subject on the list. My mom looks at my report card disappointed because of my Spanish grade “D?” she says with a frown on her face. I was not happy with her face at all. I went on and on about how my grade could be better and most importantly how I got that grade. First, I said, “I do not understand Spanish it’s just not my subject. I don’t want to take it next year if I am going to keep struggling.” My mom stopped me right there and said “Isn’t it much better if she knows two languages?” Mr. Kay my advisor said “Yes its much better” At that point I realized that I should make the decision if I want to learn a language or not.

“Language, a place of struggle” says bell hooks. Those five words mean a lot because language is a place of struggle. In my opinion language is important because not only do you need to know English to communicate with people but also if someone speaks a different language you need to know how to speak it to, that’s not always easy. Spanish for example is totally different from English and to expect someone to learn it and be able to speak it fluently is much harder then you think. I feel as though if you don’t understand the language and don’t want to learn it then that’s your choice. But again, if you think about that line “ Language, a place of struggle” you know its going to be hard and you can work through it.

Sometimes you need to do certain things to exceed in the subject you are learning. In the story “I just want to be average” by Mike rose, mike rose talks about some of his experiences in the classroom. He was placed in the Vocational track, which are mostly classes for students who are not doing well in school. Mike thought he had to be like everyone else and be good at every subject. When people learn languages or just any subject in school everyone is at a different level that is okay. Mike Rose did not understand that.

My first day of Spanish 1, one of the scariest days of my life. I have my binder and pencil out and the first thing I write in the corner of my new shiny loose-leaf paper is “Ahorita,” which means do the activity on the board right now. I didn’t no what to expect, I didn’t think I was going to do well in this class. As the days of the school year go by and I am just passing with a B when I know I can do better. I thought that since this was my first year ever learning a different language, which me not understanding it is okay but then the next school year came. I was dreading the day I had to step foot in the Spanish classroom, like always I put Ahorita at the top of my paper the first day. I knew that coming into Spanish 2 was going to be a little rough for me because I had difficulties the previous year. It turns out I was right. When I received my first test back it wasn’t what I wanted it to be. I went straight to my teacher to seek for help. He explained to me that it is fine that I am having difficulties. It will get better if I just keep studying. I realized everyone is at a different pace. I am normal I just need to work harder.

Yes, it may take a lot of work and you may struggle and at times it might not make sense but language helps you accomplish greater things. Language helps you work harder to achieve your goals. People might think now why do I need to talk Standard English or even learn a different language but in the long run it will pay off. 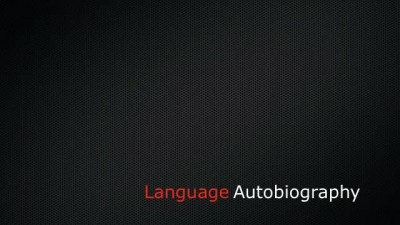