Posted by Jaime Christmas in English 2 - Pahomov on Friday, January 18, 2013 at 2:07 pm
Language, in general, has never been a huge part of my life. I never considered myself to have an accent, unless I’m around someone whose speech is drastically different from mine. Learning a new language has never come easily to me, seeing as how I’ve been trying to learn Spanish for the past nine years. When you speak a language you’re thinking in that language, I think you become less aware of the different languages around you. There’s only certain times when I can relate language in my life, and that’s usually either in a comfortable environment, with friends and family, or a professional environment which is generally school. Although, there are those occasions where people will judge my speech because they consider it to be on the opposite end of the spectrum from where they think I am, race wise.

“Oh, well I think that the when humans are put into environments where they are forced to activate their survival skills, they become desensitized.”

“Nicely put, but what does that have to do with Katniss’ love life.” She gazed at me with a perplexed expression.

“Nothing at all.” I responded underwhelmed.

The only time I’ve ever used language to my advantage is when manipulating them to the best of my abilities. Although others might view me as pretentious, I think it gives you the ability to feel professional or powerful. As though you have a chance in the “real world”. This is can be seen in the essay “I Just Wanna be Average” by Mike Ross, represented through the quote “He also loved words, enjoyed picking up big ones like salubrious and equivocal and using them in our conversations-laughing at himself as the word hit a chuckhole rolling off his tongue.” This quote shows how words and language can be articulated and used in a particular way to illustrate your dexterity. Although, just because you have a wide span vocabulary doesn’t necessarily mean you are a master of speech.

Unfortunately, language has the potential to make someone feel unintuitive, but despite this, it doesn’t always have to be a bad thing.

People may think that when students don’t strive to be the best they can be, that it shows signs of a slacker, but some kids are just more aware of the fact that they’re not all going to be president. They don’t all have access to their intelligence because of the institutions that they attend, therefore they will not all be presented with the best opportunities. This, however, sits better with some students then it does with others. This is shown through a quote in the essay “I Just Wanna be Average” by Mike Ross, “Reject the confusion and frustration by openly defining yourself as the common joe.” This quote conveys how you are able to escape or avoid all of the nonsense of trying to be a perfect human being and achieving everything that you’ve ever wanted to do by accepting the fact that not everyone is going to make a massive, positive impact on the world with their actions. Although, not only is it the words that you use that come into play, but the way you pronounce it as well.

“Why you keep talkin’ like you white or somethin’?”

Well I thought that question was only slightly ignorant. My first day at Masterman was certainly one to be remembered. I had never been in such a diverse environment before, though it didn’t make a great first impression. I thought I was supposed to benefit from this, not be judged immediately when I first opened my mouth. I thought all of these kids were supposed to be accepting and open minded, thats why I began going here in the first place. I had never considered why I “talked white”, but it had also never been brought to my attention before. As I thought about it more, I realized it just the surroundings I grew up in. Seeing as how the neighborhood and the school that I attended in elementary school were both predominately white, I could see how that would have had an affect on me. As the school year progressed, people continued to ask me the same questions, constantly. I began to just say what I knew they wanted to hear.

It seemed like the simplest solution. They would bring up the topic so much I would start to believe it. If they pushed further and asked if I was mixed, I would say something along the lines of “Oh, its because I’m Indian.” I hated these questions, because I felt almost ashamed to be African American. I always cringe when people use the word “Black” to describe the race because it never seemed natural. It sounded almost hateful.

What I’ve learned from my experiences there, about myself and this topic in general is that, you can’t act a certain color, period. In my opinion, every race was assigned a sort of quota by society that helps people associate and group others together. This doesn’t always have to be bad, but rarely is it a good thing. If you’re in the wrong setting, or you say something that doesn’t agree with the people there, then the situation could become very dangerous, which is something that I have also learned through personal history.

I’ve learned more about myself through writing this essay. When I first began it, I was hell bent against the fact that I had any personal experiences with language, accents, labels or identities, but now I realize that its something that literally everyone has a unique background with. I thought that I only spoke one language and my accent was the same as everyone else’s around me, which I realize now is not true. The language I speak with my parents is completely different from the language I speak with my friends; and with those different languages, comes different accents and personas. This has allowed me to create various different diverse friendships that I am proud to have. 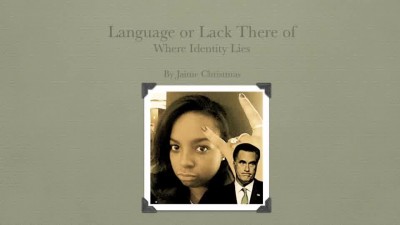