Posted by Lydia Anderson in Capstone · Hernandez/Hull · Wed on Thursday, May 10, 2018 at 1:41 pm
​My Capstone was a series of essays that detail the reasoning behind three different feeling categories; Happy, Sad, and Angry. Under each section there are four essays, making twelve in total. I decided to do this as my capstone because I wanted to better understand why I felt the way I did about certain things, as well as process certain feelings. I thought while starting my capstone that writing my initial thoughts about my feelings, others would be able to relate to them and find some kind of comfort. The writing process for this body of work was daunting, as the content I was writing was incredibly personal, and as a result, I got in my feelings a lot. This made the writing process much harder for me, I frequently felt emotionally spent by the process. I learned a lot about my ability to confront my feelings, or lack of ability. I learned how my reactions affect people, and what I can do to make sure what I say doesn’t have a negative effect on the wrong people. Overall, I am incredibly proud of the work I’ve produced and I hope that people understand the messages that I hoped to convey. Click on the image to get the link to the PDF of my final work. 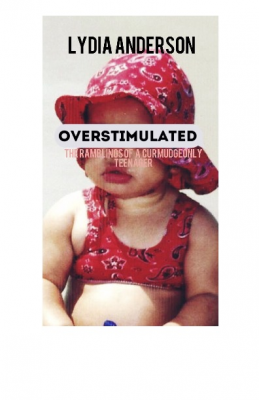 For the beginning quote of the section “Angry” I will use a quote from a letter Simone De Beauvoir sent her longtime beau Nelson Algren. She wrote to him and during it she says “I am awfully greedy; I want everything from life. I want to be a woman and to be a man, to have many friends and to have loneliness, to work much and write good books, to travel and enjoy myself, to be selfish and to be unselfish… You see, it is difficult to get all which I want. And then when I do not succeed I get mad with anger.” This quote speak a lot to me because I find that often the source of my anger stems from frustration. I chose to use this quote because of how it resonates to the feelings reflected in the section that follows it, “Anger”.

In my journey to prepare for this project I read several different essay books. I chose to use Bad Feminist as one of my example readings. I used this book mainly as a way to understand and dissect how Roxane Gay relates to her readers, how her dialogue flows and how I can use my own words in my work in a similar way.

To begin the section entitled “Happy”. Aldous Huxley is credited with saying “Happiness is not achieved by the conscious pursuit of happiness; it is generally the by-product of other activities.” The majority of the things that have made me happy, were not something I planned. The essays I am writing in this section fit this quote very well and I think that this quote is a good way to set the atmosphere going into the section.

McPeck-Stringham, Marisa. “I Can't Get Out of My Sweat Pants: An Essay on Depression.” The Huffington Post, TheHuffingtonPost.com, 30 Apr. 2015, www.huffingtonpost.com/marisa-mcpeckstringham/i-cant-get-out-of-my-sweat-pants-an-essay-on-depression_b_7175836.html.

As I partially mention in other sections, I am planning on writing about some very hard times in my life, some that people may not be able to handle. This essay talks about these things in a way that is emotional, but not so much so that it doesn’t work to convey the message. I used this to study the way she finds that balance in her writing, which I sometimes have trouble with.

I used this essay as a reference point in my early research, before I started reading the essay books of other authors. In several different articles about essays, this one written by George Orwell came up several times in several different articles. After I read it I got the vibe that Orwell has a very dark, haunting way of describing things. It was interesting to read and overall, his essay made me understand exactly the way I was going to approach writing for “Angry” and “Sad” because I plan to talk about very emotionally taxing times of my life in those sections.

I used several different sources to gather inspiration for the way I would write. Sedaris is known for adding a sarcastic and humorous tone in his writing, usually about awkward situations he has been in. He writes in a very cynical way but still people enjoy his books immensely. As a writer he has found the balance between being a skeptic and not being a complete downer in his essays. He’s essentially turned the things that were really hard for him into something funny for other people to equally enjoy. I can relate to some of the emotions he has and reading this book helped me understand how he manages to convey the messages he does, the way he does.

The Capstone website mainly serves as a base for any work I do. The capstone project has a lot of rules and a strict structure. Whenever I do work on my capstone, I have to have a tab with this site open so I know that I’m actually answering what is being asked of me by

I used this article in my search for advice on what to avoid and use when writing my essays. It explains common tropes and mistakes that people run into when they write personal essays in a way that makes a lot of sense. This helps me distinguish my writing because I now know what to avoid and what to continue doing when writing essays like this.

I used a quote from Henry David Thoreau as a preface to the section entitled “Nervous”. The quote goes as follows: “In any weather, at any hour of the day or night, I have been anxious to improve the nick of time, and notch it on my stick too; to stand on the meeting of two eternities, the past and future, which is precisely the present moment; to toe that line.” This quote for me represents and personifies some of the feelings I have when I am nervous, which makes it fit well as a preface to this section.


No comments have been posted yet.