Posted by Mackenzie Harrington in Capstone · Pahomov · Wed on Tuesday, May 8, 2018 at 1:54 pm
For the 80 hours of Castone I worked on this year, I created a group called “WOO for Women” which is an organization I created to present women's history and created women empowerment. My presentations consisted of the different waves of feminism, and how they have changed throughout the years. This project was first thought of while I was taking a gender studies class my junior year. I realized not many people knew about women's history until they were in high school, so I decided to present to middle and elementary school student in order to further their education in women's history. I thought it was important to for younger children to know more about this type of history, in order to make the future better for women. I wanted these children to realize how hard you have to work to make the world a better place, especially for girls. So I researched hard for this project, and tried to find primary and secondary sources to back up the history of certain events during the waves of feminism, such as the women's right to vote in 1920. I presented to SLA kids, Girl scout troops, and continuing to present to a school. During my different presentations, the children were engaged. I made them listen to my presentation and they we would have discussions about women stereotypes and possible jobs women had in the past, and in the current time. Another activity I made them do was to set future goals, and I was shocked by some of their answers. Many of them had goals to be the first woman to do something. For example one girl wanted to be the first woman on the moon. It shows that children are learning from the role models of women that changed the future for girls. Now with my program, I strongly believe it will encourage young women to become an activist for women's rights in their own ways, and make the world grow into a better place for women in the future. Down Below are pictures from one of my presentations.

This source is important for me to use because it is a book that talks about the second wave of feminism between the 1960’s-1980’s. In the second wave of feminism happened. This author was an influential writer of the time for women. In her book she talks about how women have gender roles pushed onto them like household responsibilities and how many wives were unhappy with their lives at home because of the life they were living as a woman. “One is not born, but rather becomes, a woman.” I am using because it means a woman is not born into these gender roles and deserve to be free to do as they wish. This will be helpful to show the sexism during this time period for my presentation

This source talks about the third wave of feminism. Which takes place in the 1980’s-some of the early years of the 2000’s. The third wave of feminism is the children of the groups of ladies from the second wave of feminism, that are passing down the feminist beliefs to their children. Such as gender roles, women empowerment, women's rights, labour in households, and high achieving women ideals. The fight was made, now the message is being spread throughout the generations.It also includes more women of color than any other wave of feminism. It is important to put this in my presentation because it is a time period I need to explain in my presentation.

This source is important to use because I also want my presentation to talk about the struggles women still have today. The fourth wave of feminism started around 2013 when more women were noticing problems on social media and still in social norms. So, more protest were conducted and more issues on social media were be protested against. The voice is now online than it is in person. Media is the way the word is being spread. More women of color were accepted and more countries got involved with raising a voice for women at this current moment in time.

The magazine article gives a glimpse into the history of alice paul, one of the biggest women activist in the 1800s to the 1900s. She helped created the organization named NAWSA, and they protested at the white house to get a law passed for women to have the right to vote. Her and a few of her followers were thrown in jail for seven months and she went on a hunger strike in 1917. They force fed her to keep her alive. Because of this incident, it gave women the right to vote in 1920. This source is a critical piece to my capstone because it gives me good information for alice paul, an important activist I want in my women's history presentation.

This source is a useful timeline of women's history with suffrage, laws, and protest. The seneca falls event is an important event I need. That is listed on this sources timeline in 1848. Some other things on this timeline are laws like in 1839 mississippi was the first state to let women own property without their husbands. In 1920 women gained the right to vote. This source is a critical piece I will use for my project because I would like to use it for a printout for the children to read with me, and I will use the information on the slides I need to make to present to them. 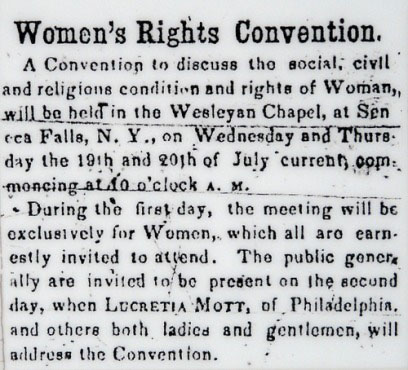 The picture is a credible source because it shows the advertising of the seneca falls meeting. The meeting was to discuss what rights women should have. First only women were invited, but then the general public was welcomed too. There was a proposal for the rights written, with a bunch of signatures at the bottom. This was the spark that created women activist to stand up against society and protest, in order to create equality for women.

This source is important to use because it gives a background of what happened after the seneca falls convention. In 1913 may 3, before president wilson's inauguration there was a women's march with 8000 women walking down pennsylvania avenue. The women's march is what sparked the public to recognize the issue whether they violently disagreed, or concernedly agreed that women needed rights.

This source is a good piece to use for my presentation because I can pull clips of it, or use the video to show the three waves of feminism. A video will keep the children interested in my presentation. All of my presentation can’t be slides. The video relates to my other research and points about the three waves of feminism. Women's figures throughout the generations are also mentioned in the video. Race was also brought up in this video. It was explained because all women were accepted by the third wave of feminism. More colored women started fighting for women's rights because they were being accepted into society.

-In women's history, women were always overlooked, but it was worse for black women. From the source in chapter six, there are stories from black slaves telling stories about their male masters suppressing them. There is more on the source about marriage laws. During the, English law, summarized in a document of 1632 entitled "The Lawes Resolutions of Women's Rights", it dates back to a time when women were married and had their husbands control their lives, but they could not kill or harm the wives. The men also could collect any income the wife makes, or property the she has. Also, if a woman had a child without being married was a crime, and they were shamed. This was around the time of 1740’s. Going more into chapter six in this article, there are stories from women that had a so called “Bastard child” ( a child without being married). This source will help me with my project because its the history I need for my presentation about women's suffrage.

This source is good to use because its a video I want to play about the waves of feminism. It sums up the time periods in each wave of feminism. Like how the the third wave started fighting for equal job opportunities and equal pay. The clip is short enough to play in my presentation. The guys information in this video backs up the other info I received above with the magazines, books,  and website information. Not only is the the waves spoken about but he talks about figures in history as well, that have impacted the waves of feminism.