In my first post, I wrote about how food waste was an underrated problem and how if we solve it,  multiple other problems in the world can be solved, including world hunger and climate change. In my second post, where I did my Original Research, I did an over the phone interview with Imperfect Produce, which is an organization that targeted food waste at its source, farms, by sending people the produce that the farms were unable to sell to name brand supermarkets.

Recently in the U.K., stores like Morrisons have been getting involved in helping to solve food waste by implementing a program called Wonky Veg, where stores sell less aesthetically pleasing fruits and vegetables for a cheaper price. The only reason this program was put in place is because it was recently revealed that 13 billion pounds of edible food is thrown away, with an extra 3 billion of food being wasted by grocery stores and supermarkets. If the Wonky Veg program was enforced in the U.S., then this would greatly diminish the amount of food that goes to waste each year.

For my Agent of Change, at first I was unsure of what to do in order to truly make an impact on this issue. I had a half baked idea of taking all of the leftover lunch food from the school and donating to different homeless shelters but in the end, I decided not to pursue this because I thought it would take more time in order to set everything up. I eventually chose to do an experiment of sorts where I would calculate how much money we spent and wasted on food in one month and then in the next month would see how much money and food we could save if we just paid attention to our food budget. I choose this option because I felt like if people could see how much money is needlessly spent on food, they would be less inclined to spend it all over the place. After taking in the results, I would present the results to my mom and a couple of her friends in order to try and get them to see the benefits of not wasting food. At first, I was going to make a website, but it was a couple of days before this was due and I realized I had no idea what I was doing, so I made a presentation of my data, which was targeted towards adults.

In March, when we didn’t budget at all, my mom and I spent about $760 dollars on food, while in April, we spent $535, saving $225 just from budgeting and shopping at places like Whole Foods, where they have gradually put uglier produce in order to combat the issue of food waste. We also took up the habit of looking at expiration dates more closely so we could keep an eye on when certain foods went bad so that we weren’t throwing out as much uneaten food. In fact, in April we only threw out 10 dollars in food, while in March we threw out around $50 worth of food. After I showed my mom these results we both decided to be more frugal when it comes to spending money on food and to save the extra money. 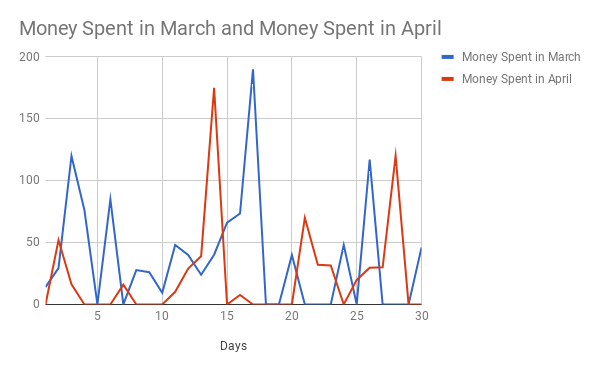 While doing this project and looking at how much money we spent and wasted, I realized how careless we were when buying food, especially fruits and vegetables since those expire the fastest. I also learned how easy it was to ignore the food you had in your fridge and pantry and instead go out to buy more food, which would lead to food being pushed to the back of your fridge until it’s expired. If I did this again, I would have people calculate how much money they spent with me in order to get more reliable data and so that other people could see how much money their family was spending, since writing down how much money you spend seems to make the numbers add up quicker. Although this did raise awareness to a couple of people, in order to solve food waste many things still need to be done in order to properly combat issue.

Here’s the link to my Annotated Bibliography