Comparing “The Taming of the Shrew” to “Enchanted”

The whole representation of identities involved in a romance is characterized in Shakespeare's "The Taming of the Shrew," and is also interpreted in the movie "Enchanted." In "Taming of the Shrew," Lucentio and Tranio become different identities, tricking other characters in the book, trying to be loved as who they are pretending to be. Lucentio deceived Bianca by acting like he was someone else in hopes of her falling in love with him. Katherine was also deceived by Petruchio who tried to persuade her that there was an arranged marriage. Similarly, Giselle, the princess in “Enchanted,” constantly reminds the animals and people throughout the movie that you have to wear certain clothes and act a certain way in order to prove your love for someone; yet conflict arises when she receives help in the modern world from a divorce lawyer and encounters the downsides of relationships between couples. Both the play and the movie depict that false identities made for love eventually become revealed.

We have not yet been seen in any house,

Nor can we be distinguished by our faces

For man or master. Then it follows thus:

Thou shalt be master, Tranio, in my stead,

Keep house and port and servants as I should.

I will some other be, some Florentine,

Some Neapolitan, or meaner man of Pisa.

'Tis hatch'd, and shall be so. Tranio, at once

In this quote, Lucentio is explaining to Tranio that no one has either of their identities memorized. He continues to tell Tranio the rules and remembers to tell him to even act like him. Acting like Lucentio would mean telling the servants what to do as Lucentio would do himself. Finally, Lucentio assures Tranio that he will make up who he wants to pretend to be. Options included being a guy from Florence, Naples, or Pisa.

Robert encounters a similar situation, but is in forced in a position to play the role.

In this scene, Giselle finishes singing about all of the things that Robert could possibly do win back the heart of his fiance. She tells him to send her flowers, wear stuff that matches characteristics of her, and go completely out of your way. That’s why the song goes “ That’s how you know” because she is saying all of this grand gestures will prove whether you love or not. At the end of the song, she sends his fiance doves, flowers, and two tickets to the ball.  Instead of Lucentio, who chose to take on something that he is not, Robert was stuck in a role. The flowers were received, but also questioned by Robert’s fiance, because “it didn’t seem like him.”

In both “Enchanted” and “The Taming of the Shrew” they both portray the cover up and false interpretations of relationships.

“(to TRANIO) Sir, understand you this of me, in sooth:

The youngest daughter, whom you hearken for,

And will not promise her to any man

Until the elder sister first be wed.

The younger then is free, and not before.”

In this quote, Petruchio is making it very clear to Tranio that Bianca is off limits due to her father’s request.  No one is allowed to have Bianca until Katherine is married to someone. Meaning that whoever wants Bianca has to wait, which adds conflict.

Giselle, like Petruchio, tries to teach ways of love to each other, yet it later becomes upsetting. 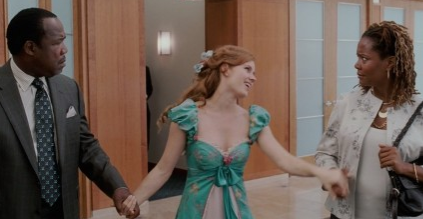 In this scene, Giselle gets the reality of marriage and relationships, and ends up witnessing the downfall of how they could be. She learns that not everyone is going to stay in love with each other. Robert then persuades Giselle to deal with the fact that the couple simply do not want to be together anymore, due to the many issues they were seeming to face. The couple in this scene were filing for a divorce, and later learn after Giselle’s reaction what they fell in love with about each other. Both Giselle and Petruchio try to highlight to other characters the standards of love.

Roberts ends up marrying Giselle, and Robert’s ex-fiance ends up going for Giselle’s prince. Petruchio ends up winning more than what was expected in the overall. Giselle seemed to have a deeper education on definitions and ways of love. Everyone does end up happy with their “true love.” The audience was shown that identities will eventually be revealed, yet aso be loved for who they are.

Your thesis was very easy for me to understand yet it was so well written. The thesis gave me a handful of idea of how people would contradict your argument. The way how you defend your thesis with both of the play and movie is very creative and really makes me think. I also admire the movie choice that you chose because this is a movie that brings fantasy and reality together to make romance

I like the way that your essay was structured because it was very easy to comprehend and follow.There could be alot of connections that can be made throughout the book and the movie but I feel that the one that you chose to examine is the most logical one.The points made in the essy about comparison and contrasting can be interperted as being very influenced twoards the pursuiters rher than the "prize"