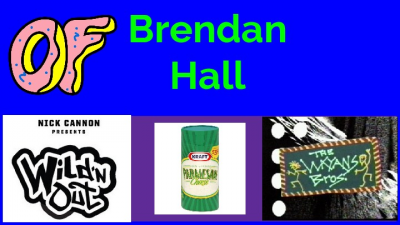 For my slide I put pictures of things things that define me. I know many people are probably saying, ¨This is weird why does he have donuts and parm on his slide.¨ I will answer that question right now. The reason I have the donuts is because it is the logo of Odd Future, who is my favorite entertainment collective. Odd Future includes members such as Frank Ocean, Tyler, The Creator, and Earl Sweatshirt who are artists that make music which I enjoy. It also includes other members such as Jasper, Taco, and Lionel who are guys who worked on the comedy show Loiter Squad which I find to be hilarious. Now to answer why I have Parmesan cheese on here it´s because my best friend since second grade, Jim Thomas, goes by the nickname of Super Parm because he thinks it sounds cool. He was one the first friends I made and to this day I feel very close to him.  I also have the Wild ´N´ Out logo and Wayans brothers logo.  I have the Wild N Out logo on here because it is my favorite tv show that has many improv comedians on it and one of my goals in life is to get on the show. Finally I have the Wayans brothers logo because that Tv show is my favorite scripted show I hope to someone write for a show as good as Wayans Bros.